Home News Culture A Tribute to the Late Mighty Rebel 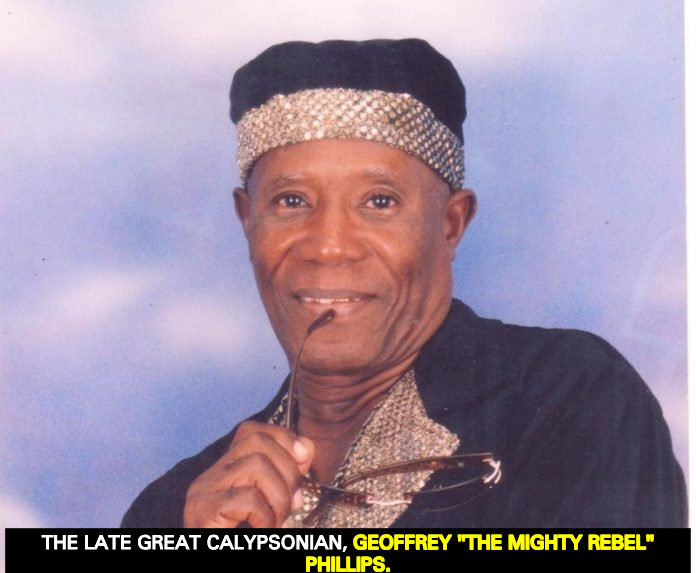 It is with a heavy heart that the local world of Calypso said farewell to arguably, one of its most gifted representatives—Geoffrey “The Mighty Rebel” Phillips.

This lover of the arts passed away at the Georgetown Public Hospital Corporation (GPHC) on Thursday, May 3. He was 72 and struggled for some time with kidney failure.

Many Guyanese, and even fans beyond these shores, are quite au fait with the Mighty Rebel’s envious repertoire of accolades and songs. The six-time Calypso Monarch winner is well known for his artistic and thought provoking hits about Guyana’s political affairs which include “Political Lie” and “Ask de President.”

But The Mighty Rebel’s affair with music predates his debut Calypso performance in 1979.

It was at age 20 that Phillips officially began his contribution to the local music industry. It all started when he joined forces with some of his friends and formed a string orchestra called the ‘Hermits’.

Vincent James, one of Phillips’ friend and an experienced guitar player, had already been identified to be the lead guitar player in the budding group. But there was only one problem.  The band had its members but no instruments.

But all hope was not lost for the band. They were able to purchase a guitar from Raymond Henry, a staunch Christian who Vincent had met one day on his way home. A bass guitar was built by another member of the band, Joseph Thomas.

The boys then pooled their resources and paid someone to build an amplifier through which the guitars played. After a few shows, the band gained popularity.

All this time, Phillips was playing guitar for the group, quite unaware that he could make any vocal contribution. But Phillips was about to stun himself and everyone else at an upcoming show.

One Old Year’s Night, the group had show at a cinema on the West Bank of Demerara. One can say that the Universe wanted Phillips to sing since the lead singer was absent. Motions to cancel the show were already set in place but Phillips knew the songs and in attempt to save face, he decided to literally, “face the music.”

The little boy from Evans Street, Charlestown stunned the crowd. Since that performance, there was no stopping him. He stayed with the band until 1978.

RISE OF THE MIGHTY REBEL

On the heels of his popularity with the Hermits, Phillips went to join the Calypsonians’ Association of Guyana. That same year, Phillips made his debut at the Mash Calypso contest in 1979 singing under the name “Mighty Rebel.” He placed fourth that year.

In 1980, in the same competition, he placed second. He also copped the fourth and fifth positions in 1981 and 1982 respectively.

This was followed by a series of second places from 1983 to 1987 successively.

For the next five years, Phillips toured the world with the Chronicle Atlantic Symphony singing in the band along with Compton Hodge and Dan Shultz.

But Phillips was not finished with the national Calypso contest. He wanted the crown and so staged a comeback. In 1993, the Mighty Rebel was victorious with the famous “Desi yuh wrong,” which was a satirical piece that criticized former President Desmond Hoyte.

He also won the Soca Monarch Crown in 1999 with his piece “One step forward, plenty plenty backward.”

As a cultural ambassador for Guyana, Phillips was fortunate to tour the United States on eight separate occasions, performing in and visiting New York, Washington, California, Texas, Delaware, and Miami. He has also performed in Ottawa in Canada, Belize, Barbados, Trinidad and Tobago, among others. Phillips’ singing ability was applauded by the State of California, as well as the then Mayor of Ottawa, Marian Dewar, in 1981.

The father of nine children held a Distinction in Public Speaking and Communications from the Critchlow Labour College.

In an effort to inspire and train others in the art of Calypso, the Mighty Rebel mentored a large number of our budding calypsonians at various levels of competition. His students included Young Bill Rogers, Mighty VJ and Lady Explainer.

While the Mighty Rebel has passed on, his body of work which includes 700 songs will always serve as a reminder that music can stir change while allowing us to have a few laughs along the way.