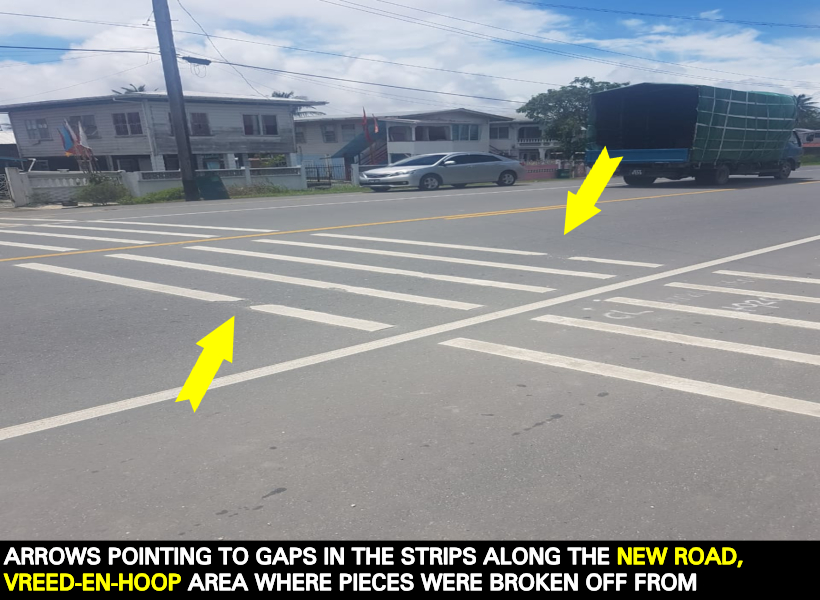 Just weeks after they were installed, several rumble strips along the West Demerara Highway have already begun to deteriorate, creating headaches for both drivers and commuters that utilise the link.

Rumble strips are a series of raised strips that are placed strategically on a road or along its edge, with the purpose of changing the noise a vehicle’s tyres make. This warns the driver of speed restrictions, or to indicate where the edge of the road is located. Ultimately, this mechanism’s sole purpose is to maintain safety along highways, or major thoroughfares.

This precautionary measure was implemented as part of the US$46.8M West Demerara Road Expansion Project, which began back in January 2015.

It is still unclear what is the cost of installing these strips however, they can be seen engraved in various locations within the asphaltic infrastructure, stretching from Vreed-en-Hoop in the west, to Hydronie in the east.

Closer examination indicates that some of these strips are deteriorating at a fast rate, judging from the fresh debris located within close proximity to the ones in the vicinity of New Road, Vreed-en-Hoop, and two others located in the Ruimzeight/La Jalousie area.

During a visit earlier this week, the Guyana Standard was greeted by residents, as they complained about the sidewalks not being safe due to the “pitching and flying” debris, breaking off from the strips upon vehicular impact.

One resident lamented on the lack of advance warning mechanisms, and inadequate lighting. He noted that it can be difficult for drivers who unfamiliar with the area, to traverse at nights.

The West Demerara Road Expansion Project is being carried via a joint-venture between BK International, and Jamaican firm, Surrey Paving and Aggregate Company Limited.