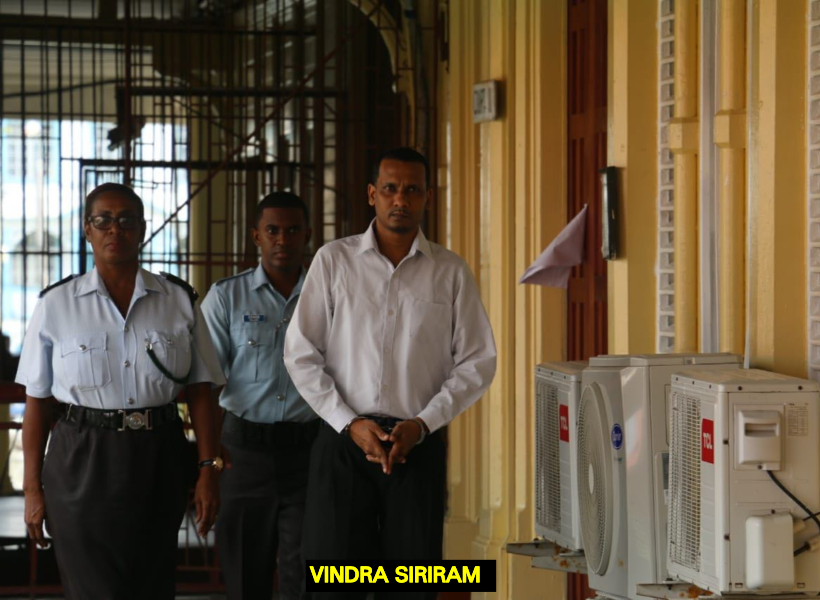 Thirty five-year-old Vindra Siriram has been served a 22 year jail sentence for killing his reputed wife, Shelly Ann Persaud. The victim was found dead with her head submerged in a bucket of water at their Friendship, East Bank Demerara home.

Supreme Court Judge James Bovell Drakes handed down the custodial punishment at the High Court in Georgetown this afternoon, almost a month after Siriram was convicted of the crime by a 12 member mixed jury.

Upon his arraignment before the court, Siriram pleaded not guilty to the charge which stated that between June 9 and 10, 2014, he murdered the then 22-year-old woman.

Persaud, a housewife was found at the bottom of the back stairs of the couple’s premises.

Her head was partly submerged in a five-gallon bucket of water.  Following the discovery of the woman’s body, a report was made by the family to the police.

Subsequent investigations led to Siriram being taken into custody and charged for the murder.

Throughout the trial, the convict was represented by Attorney-at-Law Damian DaSilva. Appearing for the state was Prosecutor Seeta Bishundial.

According to a Probation and Social Services Officer, Siriram and Persaud met when she was just 19 and shared three children. She disclosed that the convict also fathered a child from a previous relation.

The court was told by the Probation Officer that the convict’s two eldest daughters were adopted by an overseas-based couple after they were taken into custody of the Child Care and Protection Agency, due to certain situations.

The Probation Officer said that at the tender age of seven, Siriram was diagnosed with meningitis, and as a result suffered from severe headaches.

She told the court that diagnosis prevented Siriram from attending school regularly which led to him being unable to write Common Entrance exams.

According to her, some residents in the neighbour do not believe that it was Siriram who murdered the woman, citing that he was a hard worker and calm individual.

However, the Social Services Officers disclosed that some residents assumed that Siriram “snapped” on the fatal day due to widespread reports around the community of his wife being unfaithful.