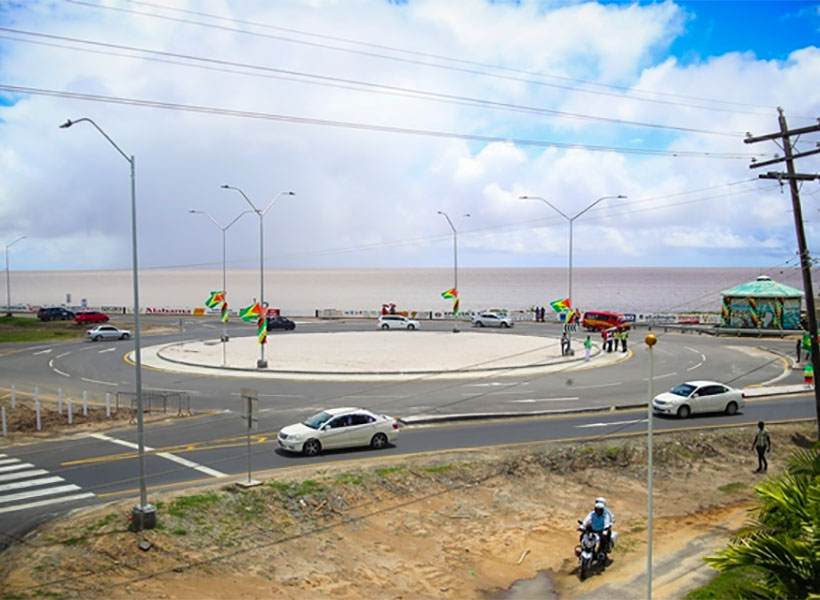 The Kitty roundabout is finally fully completed and ready to be used by the public. The roundabout, located at the junction of Vlissingen Road and Carifesta Avenue, was officially opened today.

Being Georgetown’s first major roundabout, the Kitty facility is expected to significantly improve the flow of traffic.

At the opening ceremony, Minister of Public Infrastructure, David Patterson said that the $79Million roundabout was not quite complete with “some outstanding items remaining include landscaping of the centre…. We decided that the landscaping will depict flowers of the Caribbean in keeping with the Carifesta theme; a suitable private company will be selected to execute that. Traffic lights will be installed and the painting of the mediums and curbs with reflective paints will be done by the ministry shortly.”

The final phase is the waterfront development. For this, the seawall area—from the Kitty pump station to the Pegasus Hotel—will be upgraded into a commercial space. Work on that project is yet to commence but the consultancy has been awarded and a first report is expected in October.

Patterson recalled that the first phase began with the upgrading of Carifesta Avenue in 2016 for over $182Million including new street lights. Following that, extensive pipe works were conducted in the vicinity of the roundabout after a sinkhole developed in December due to the failure of three pipes feeding the Kitty pump station.  That entailed the installation of culverts along Kitty, Vlissingen Road and Carifesta Avenue leading to the pump station in order to improve drainage in the outlying areas and to create a firm base for the roundabout.

Two other roundabouts are to be constructed – one on Sheriff Street under the Sheriff/Mandela Avenue road project and another at Timehri.