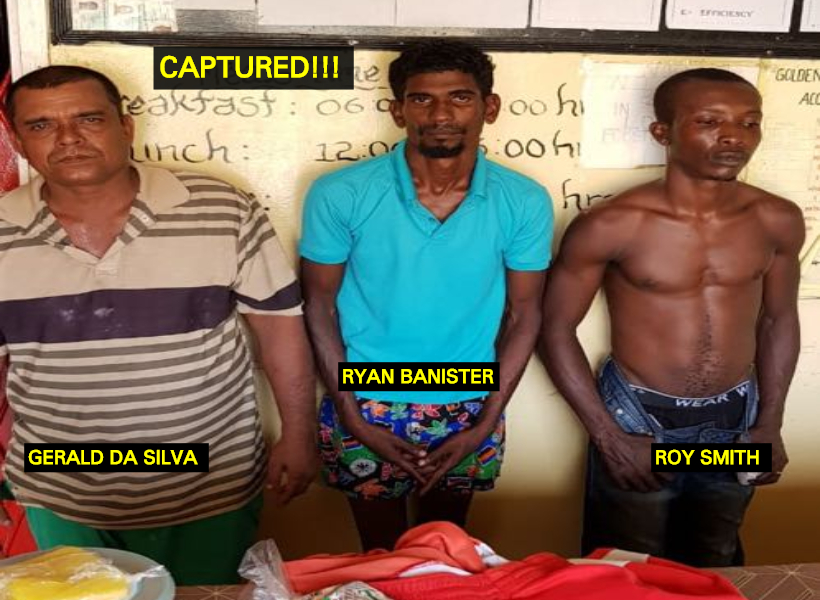 Quick action by the police has led to the arrest of three bandits. The criminals were captured minutes after they tied a security guard with a pair of shoelace and entered the newly opened Number One Supermarket at Lot 18 Grove Public Road, East Bank Demerara.

Banister was the only person armed with a handgun. Detectives believed that Da Silva of Covent Garden, East Bank Demerara was the mastermind behind the attempted robbery. There are reports that he visited the supermarket at least three times before the robbery was plotted.

Information received suggests that the three bandits entered the yard by using a crowbar to prise a padlock that was on the gate. They then approached the security guard, who was sleeping at the time and robbed him.

A police source said that after tying the guard, the suspects then prised a western window on the second flat of the four-storey building. The supermarket is located in the bottom flat of the property and is owned and operated by You Zhi Lin, his sister, Xiu Li Lin and her husband, Guang Ting Fan.

The Guyana Standard has been told that at the time of the robbery, the owners were all asleep in their bedrooms and were not aware of what was happening.

Surveillance footage showed once the men were inside, they started grabbing cash and phone cards from the cash register. By this time, ranks on patrol arrived and immediately started searching the building.

The suspects were arrested and according to the police, Ryan Banister admitted that he had a firearm and took ranks to an area in the supermarket where he hid the weapon.

The supermarket opened less than a month ago.