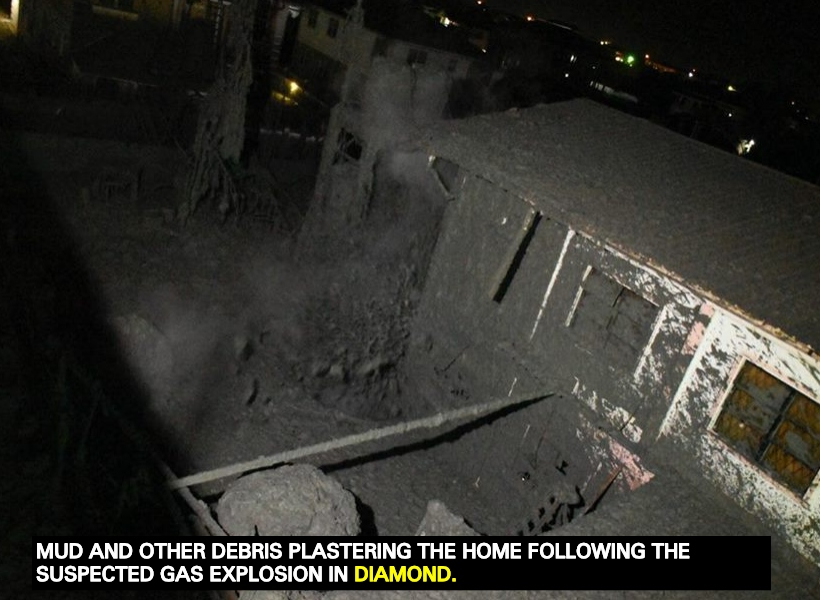 There has been a suspected natural gas explosion in the backyard of a forth street, Section A Block X, Diamond, East Bank Demerara (EBD) property.

According to information received, homeowner, Somnauth Gorakh hired a private contractor to dig a water-well in his backyard.

A little after 18:00hrs yesterday, as the workers were both digging and drilling a hole which was about three-feet wide, there was a loud explosion—causing the men to run for their lives.

The explosion caused a fountain of water and mud to spew over 30 feet into the air. In less than 30 minutes, the entire two-story property was covered with what looks like mud, forcing Gorakh and his family to move for the night.

Houses nearby were also covered with the muddy substance. The Guyana Standard was informed that the Guyana Fire Service and the Police Force were overlooking the property up to this morning.

It is believed that the workers might have hit a pocket of gas while drilling into the earth. A team from the Guyana Geology and Mines Commission (GGMC) is expected to survey the area today and conduct tests to confirm whether it is indeed natural gas.

When this news agency visited the area last night, one neighbour claimed that she was making dinner when she heard the loud explosion. “I was inside cooking and I thought it was gunshots going off…about 20 minutes after, I hear people start talking and I come out and see was the gas explosion.”

This recent explosion is similar to one that happened in the neighbouring village, Grove.

In 2009, a resident, Rajendra Samaroo had an engineer drilling a well in his backyard when methane gas that was some 120 feet below home erupted.

Samaroo was experiencing irregular supply of water and was creating the well to provide portable water for his family and neighbours. The gas was tested and confirmed to be methane.

When the last check was made in 2013, it was found that the Samaroo family was cooking for free. They were using the simple apparatus made up of two tanks, pipelines and valves created by GGMC to send methane gas to his stove.

It is unclear if the family still benefits from the free cooking gas.