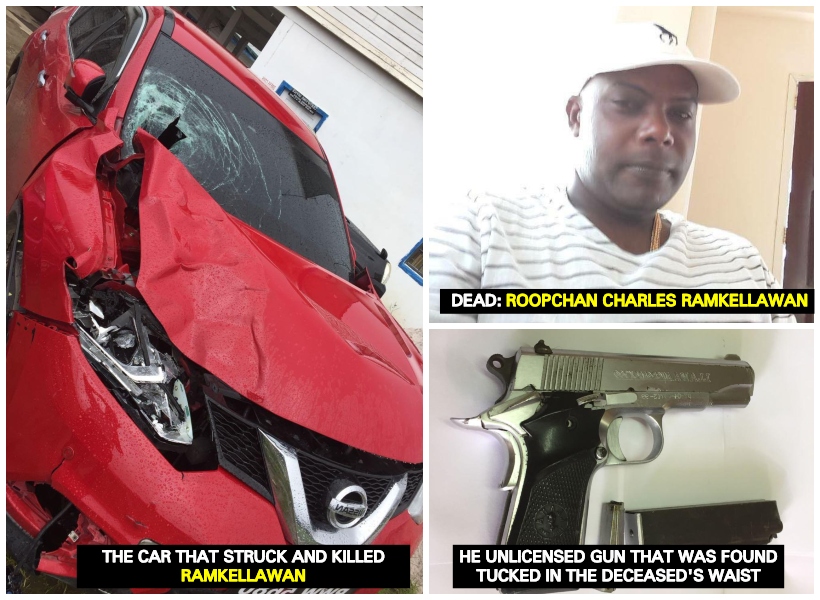 Roopchan Charles Ramkellawan, 38, of Tuschen Housing Scheme, East Bank Essequibo, was walking to his vehicle, which was parked on the Public Road, when a speeding car struck him from behind, killing him on the spot.

The police, in a release, said that the victim was walking on the road when he was struck by motorcar, PWW 5680 driven by Captain Eson Trim, 28, a gazette officer of the Guyana Defense Force.

Trim, a South Ruimveldt Garden resident, was allegedly proceeding east along on the northern carriageway when he hit and killed the father of one. A breathalyzer test revealed that his alcohol level was above the legal limit.

Up to press time, he was in police custody at the Leonora Police Station.

Following the accident, Ramkellawan was rushed to the Leonora Cottage Hospital where he was pronounced dead on arrival. The police said an unlicensed pistol with four live rounds was found tucked in the deceased’s waist.

A family member of the victim, who asked that their name be withheld, said that the 38-year-old man collected his six-month-old son to spend some time with him on Father’s day. He then left his Tuschen’s home to take back the baby to his mother at De Willem.

The Guyana Standard was told that after Ramkellawan dropped off his son, he and one of his cousins stopped at a venue in De Willem to grab something to eat.

“It was when they were walking back to the car, he (Ramkellawan) get knock down. The car was coming in full speed from behind and he (Ramkellawan) was walking towards the driver side of the vehicle to open the door,” the relative explained.

It is suspected that Ramkellawan died as a result of the severe head injuries he sustained. He also had injuries to his back, feet and arm. His body is currently at the Ezekiel Funeral Home, awaiting a post-mortem examination.

On a Facebook post, his brother, Mahendra Ramkellawan expressed shock at his sibling’s sudden and “untimely&quot; demise.