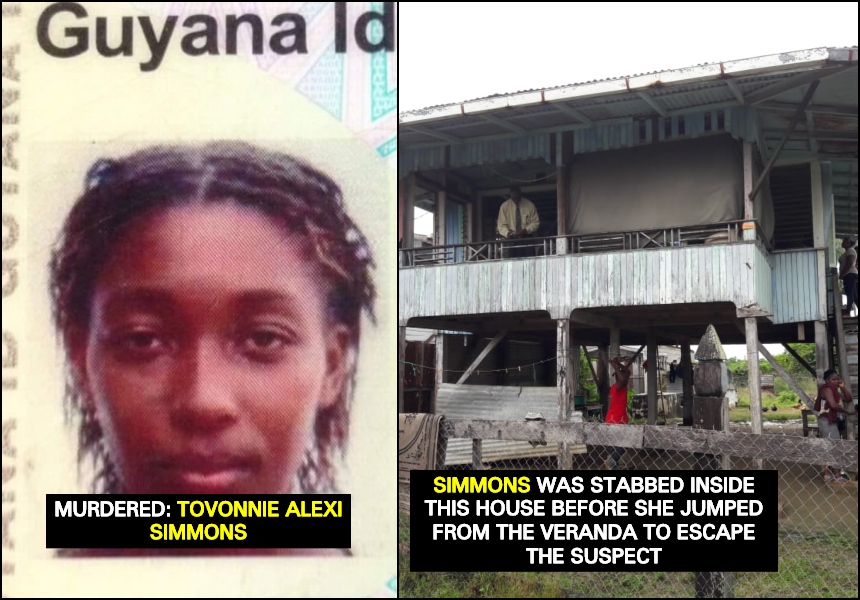 A 28-year-old mother lost her life around 23:20 hrs yesterday after her estranged husband went berserk, stabbing her 12 times about the body before slitting her throat in the presence of her shaken mother.

The gruesome episode played out in Berbice. The victim has been identified as Tovonnie Alexi Simmons of Second Street, Limlair Village, Corentyne, Berbice. She was stabbed to the neck, left breast, back, left side hip, chin, chest, and left side forearm.

The mother of four was brutally murdered by her estranged husband, Imran Lyte, a 28-year-old farmer. After committing the horrific act, Lyte attempted to take his own life by consuming a poisonous substance. He was however rushed to the Port Mourant hospital where he is being treated in the presence of police ranks.

According to information received, the victim moved into the home of her mother, Jacquelyn Henry, a few months ago after suffering from physical abuse at the hands of the suspect. But a determined Lyte tried on numerous occasions to win her back.

Henry said when her daughter turned down the suspect’s offer; he got upset and threatened to kill her. He even attacked one of the victim’s brothers on Sunday by chopping him on the hand. A police report was made at the Whim Police Station but the suspect was never arrested.

Investigators noted that last night, the suspect went to the woman’s home to discuss the chopping incident but an argument erupted. This resulted in the farmer pulling out a knife from his back pocket and stabbing Simmons.

Simmons’ mother was at home but before she realized what was happening, the young mother had already run out of the house and jumped from a verandah to escape the suspect. Lyte eventually caught up with Simmons after she collapsed about 200 meters from the scene.

The Guyana Standard was told that the suspect stood over a bawling Simmons on the road, stared at her, bent over to slit her throat and finally, ran away from the scene.

The mother of four was taken to the Port Mourant hospital but was pronounced dead on arrival.

This morning, Simmons’ mother told this news agency that her daughter would have been alive if ranks at the Whim Mourant Police Station had taken her daughter’s report against the suspect seriously.

The woman recalled that it was only a few days ago her daughter made a report at the station after Lyte started stalking her, and threatening to end her life.

“The police didn’t do anything and when she (the victim) realized they ain’t arrest him, she went back to the station and begged them for a restraining order on Monday. But again, they did nothing,” Henry said.

She is calling on the Guyana Police Force to put measures in place to train police ranks in dealing with domestic violence matters.

It was only two weeks ago, an unemployed man hammered his daughter to death before slitting his wife’s throat at their Glasgow Housing Scheme, East Bank Berbice home. He committed suicide by hanging himself.

The victims were 38-year-old Bhindomattie Seetaram and her 21-year-old daughter, Aneila Khan. The suspect is Jainarine Seetaram called ‘Rado.’ Their 10-year-old son, Mahesh managed to escape the attack.