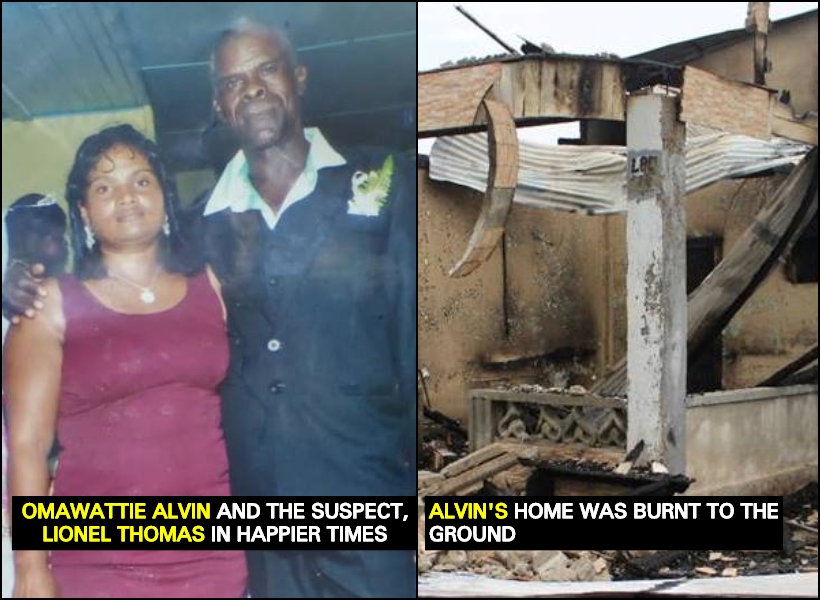 A 62-year-old broke a champagne bottle on his pregnant daughter’s head before attempting to slit his estrange wife’s throat with a piece of broken glass on Wednesday night.

The suspect, Lionel Thomas then allegedly set his victims’ Lot 192 Area R Babu Jaan, Port Mourant, Berbice home on fire after they managed to escape his wrath. He is now on the run.

The victims have been identified as Omawattie Alvin, 47, and her 17-year-old daughter, who is seven months pregnant.

The entire episode played out less than an hour after the 62-year-old man was released from police custody for attacking Alvin a week ago. The woman and her daughter have since gone into hiding.

Alvin and the suspect separated two years ago over his alleged violent behavior.

The Guyana Standard spoke with a traumatized Alvin this morning who said that Thomas has demonstrated no limits in his attempts to harm her.

Alvin said that she was plying her trade as a fish vendor at the Port Mourant Market last week when the suspect approached her and started attacking her. The matter was reported and he was arrested.

On Wednesday however, the devastated woman recalled that she reached home a little before 18:00 hrs and was about to get something to eat from the kitchen when she heard what sounded like footsteps.

“The place was lil dark so when I hear the footsteps, I say it mussy meh daughter cuz she was upstairs but then I hear he say, ‘Way you deh, I gone kill you today’,” the woman said, adding that the suspect then grabbed her and started punching her.

According to the still traumatized Alvin, her estrange spouse then pulled out a knife and stabbed her to the abdomen. “My daughter hear I hollering and run downstairs and she hold onto the knife and cut she hand.”

The Guyana Standard was told that the suspect then picked up a champagne bottle that was nearby and hit his daughter in the head. Then, he took a piece of glass from the broken bottle and attempted to slit Alvin’s throat but her daughter rescued her.

Both women managed to escape. They went to the Rose Hall Outpost to report the matter. “The police tell us not to return home so we went by a relative house and like an hour later, we get a call that the house burn down,” the woman said.

“I work hard to get those things and look he come and burn it. I know he did it and he will stop at nothing to kill me,” a worried Alvin said.

She is calling on the Guyana Police Force to hunt the suspect before he finds her and ends her life.

Only Wednesday night, a mother of four, Tovonnie Alexi Simmons, lost her life after her estrange husband slit her throat and stabbed her 12 times about the body at her mother’s Second Street, Limlair Village, Corentyne, Berbice.

After committing the horrific act, the suspect, Imran Lyte attempted to take his own life by consuming a poisonous substance but he was rushed to the hospital where he is currently a patient.