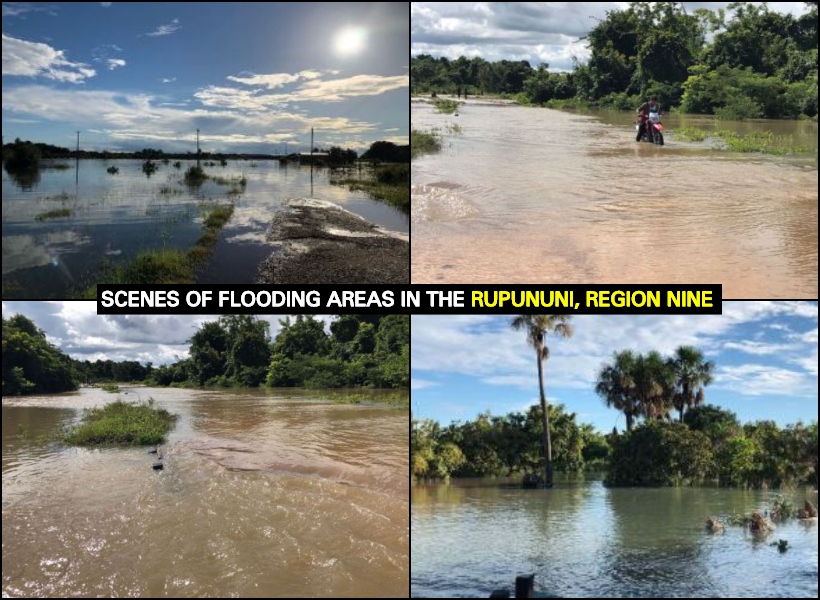 The Civil Defence Commission (CDC), the Ministries of Public Health and Public Infrastructure, and the Regional Democratic Council (RDC) are currently assessing flood-affected communities in Region Nine (Upper Takutu-Upper Essequibo) and monitoring the level of preparedness of the region.

On Saturday, the team visited Karasabai, South Pakaraimas, where the main access roads and the level of water at the Ireng and Takutu Rivers were evaluated.

Director General (ag) of the CDC, Lieutenant Colonel, Kester Craig said it was observed that Central Karasabai and its environs are threatened. He said that some of the villages are cut off because of the level of water on the bridges. Craig said that the community of Aishalton is also affected along with other areas of the Deep South.

An assessment was also conducted in and around central Rupununi, particularly in Lethem. It was observed that the water level in the Takutu River has risen and residents residing behind the Tabatinga Creek are affected. Craig said several homes were under water and thus far, two families were relocated. One group is staying with family members and another other is at a temporary shelter that was established by the Mayor and Town Council.

“The CDC is continuing to work closely with the RDC to establish a needs list. What we have observed is that we need to have communication at all times with all of the communities in the event that the water level increases. We will need to communicate to determine what level of supplies they would need. We will also need to continue to check with the hospital, health post and health centres ensure they have the maximum of supplies to deal with any water-related type of illnesses,” Craig said.

The Director-General further noted that the CDC will continue to work with the RDC to determine if there they will be a need for long-term shelters, supplies, beddings, sheets, cots, food and cleaning agents.  He also commended the RDC and the Council for responding promptly to the situation.

Craig told the Department of Public Information (DPI) that the main aim of the visit is to locate deficiencies in the region’s preparedness and response capability and work towards enhancing them.

Over the past week, heavy rains caused flooding in the South Pakaraimas, Deep South, and Central Rupununi areas. Alternative routes between communities of Katoonarib to Karaudarnauwa were identified so that residents and vehicles can safely travel to their destinations. (A Department of Public Information report)