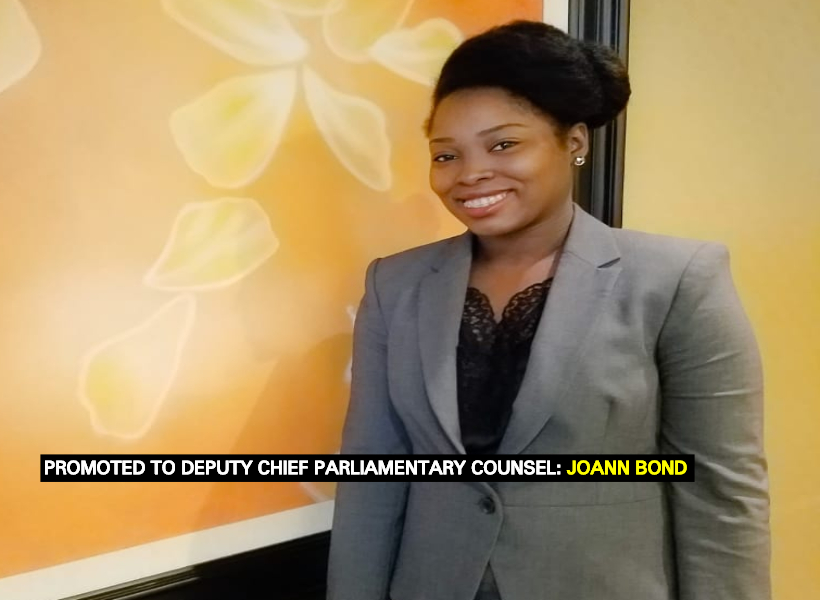 The Attorney General’s Chambers and Ministry of Legal Affairs announces the promotion of Ms Joann Bond to the position of Deputy Chief Parliamentary Counsel.

In 2014, Ms Bond was awarded the prestigious Chevening Scholarship to pursue studies in London, United Kingdom and is the holder of an LLM in Advanced Legislative Studies (with distinction) from the Institute of Advanced Legal Studies (IALS), University of London.

She is also a graduate of the Hugh Wooding Law School where she obtained her Legal Education Certificate (LEC) in 2009, the University of Guyana where she received her Bachelors of Law Degree (LLB) (credit) in 2007 and Presidents College. She is also proficient in the area of law revision having been trained by the Regional Law Revision Centre Inc. in Anguilla.  Ms Bond also completed an internship with the Organisation for the Prohibition of Chemical Weapons in The Hague, Netherlands.

In addition to her main duties of drafting primary and subsidiary legislation of varying degrees of complexity, she also gives technical support to the Anti-Money Laundering and Countering the Financing of Terrorism and Proliferation Financing Committee and the Advisory Council on the Prerogative of Mercy. Ms Bond is a trained Caribbean Action Task Force (CFATF) Legal Assessor and is currently engaged in the Mutual Evaluation Process of the Turks and Caicos Islands. She is also the Chairperson of the Bid Protest Committee and a member of the Commonwealth Association of Legislative Counsel.