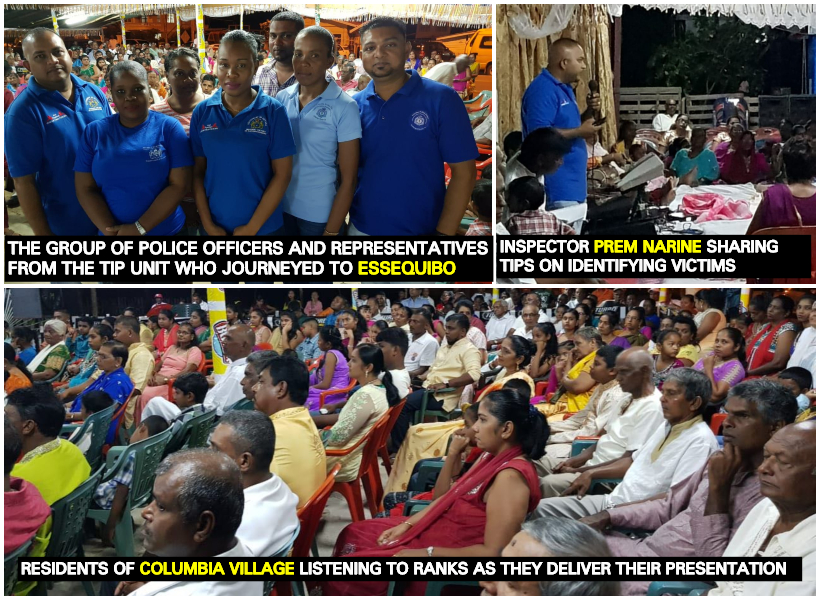 More than 1000 residents on the Essequibo Coast benefited from an awareness campaign on trafficking in persons (TIP) on Saturday.

The exercise was delivered by the Guyana Police Force (GPF)’s Trafficking in Persons Unit to residents in Mainstay Wyaka and Columbia. Inspector Prem Narine, Sergeant Castello, and Sergeant Pitaman—senior detectives from the Force’s Major Crimes Unit— headed the campaign that is aimed at using knowledge to combat human trafficking.

TIP is defined as the recruitment, transportation, or harbouring of persons, by means of threat or the use of force for the purpose of exploitation.

The Guyana Standard understands that the Crime Chief, Paul Williams played an integral role in organizing the exercise. It was the first time such an exercise was taken to the Essequibo Coast.

First, the visiting ranks had the opportunity of spreading awareness among 700 residents in Mainstay Wyaka. They explained the impact of TIP, the vulnerability and the ways of reporting TIP to the police.

Flyers with additional information on TIP and a list of contact information with officials from the Force were distributed. Then, the party of policemen journeyed to Columbia village where there was a religious gathering organized by businessman Yog Mahadeo with 400 persons in attendance.

There, the ranks did a presentation on four types of TIP, which are more prevalent in Guyana. These include sexual exploitation; forced labour, domestic servitude, and forced begging.

Information on identifying TIP victims was revealed and flyers with additional information were shared. The presentation was lauded as a success and residents called for it to be taken to other villages.

The campaign was carried out just days after the US Department of State released its 2017 report on trafficking in person in Guyana. It states that the country has met the minimum standards for the elimination of trafficking in person (TIP) but it needs to do more to provide protection and shelter outside of its capital city for children and men.