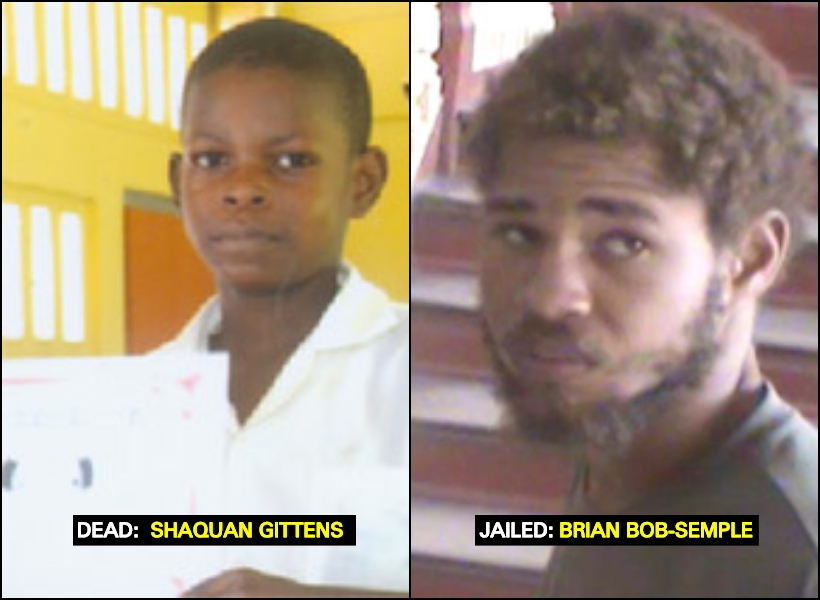 Brian Bob-Semple appeared before Justice Sandil Kissoon this morning and pleaded guilty to a manslaughter charge, admitting that he unlawfully killed 9-year-old Shaquan Gittens who he also sodomized.

Bob-Semple was jailed for 23 years for the gruesome killing. He is not eligible for parole.

Bob-Semple, who is now 25, had undergone several psychiatric evaluations at the hands of Government Psychiatrist Dr. Bhiro Harry who deemed him competent to stand trial for the offence back in 2016.

Bob-Semple, who was represented by Attorney-at-Law Maxwell McKay, was initially indicted for murder.

That charge had alleged that on April 14, 2015 in the county of Demerara, he murdered Gittens. He however opted to plead guilty to the lesser offence manslaughter.

According to reports, Bob-Semple saw the little boy walking at night on Caneview Avenue, South Ruimveldt, Georgetown and admitted to police that he ‘tripped’ the boy, causing him to fall to the ground.

After Gittens fell, Bob-Semple dragged him to an area which is approximately half a mile from the nearest house in South Ruimveldt. He tied the boy’s hands and sodomized him until he reached an orgasm. He then choked the lad until he passed out and then slept with him under a tree.

After realizing that the child was motionless the following morning, Bob-Semple severed the child’s penis and had sex with him again. He then took Gittens to a trench, where he dumped his body.

A postmortem examination revealed that Gittens died of manual strangulation and drowning.

In a plea of mitigation, McKay begged the court for leniency. The lawyer further admitted that no person in their right frame of mind would commit such an act.