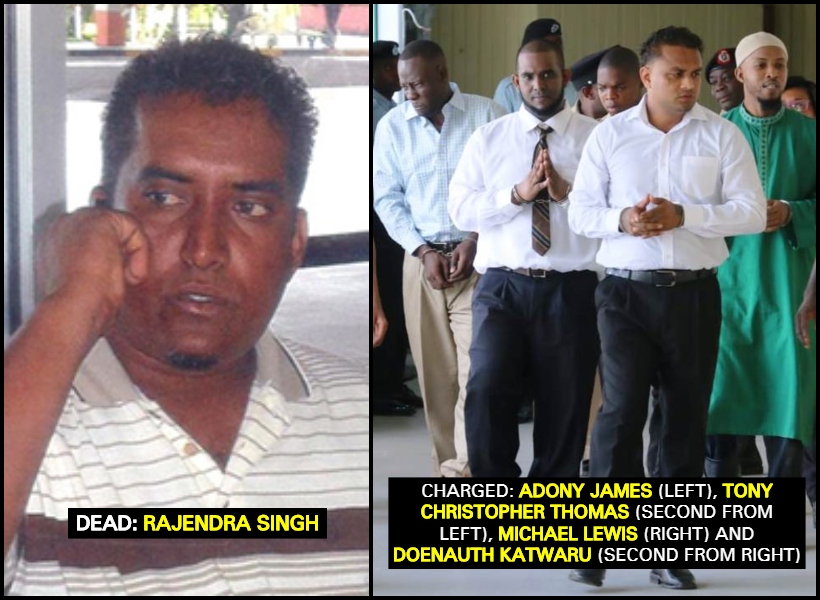 Four men who are charged with the murder of Foulis, East Coast Demerara businessman Rajendra Singh will go on trial for the offence from September 03, 2018 before Justice Brassington Reynolds.

They are alleged to have committed the crime between April 5, 2014 and April 9, 2014 in the County of Demerara.

Under heavy guard by joint service ranks, the quartet sat in the prisoners’ dock from where they were informed of their trial date. Justice Reynolds informed the four murder accused that their matter will be heard in the next two months.

In the meantime, the four murder accused remain on remand.

His car was found abandoned in Goedverwagting, East Coast Demerara by his wife. The kidnappers had initially demanded $50M from the family, but reduced it to $25M. The ransom was never paid.

Sometime after, Singh was found dead with a bullet wound to the head in an isolated part of the Le Repentir Cemetery. His killers had used a jersey to tie his mouth and nose. The killers then proceeded to stuff him in an alcove created by some fallen trees.

They had removed his pants, leaving him clad in his socks and his underwear. His hands were bound with what appeared to be his belt.