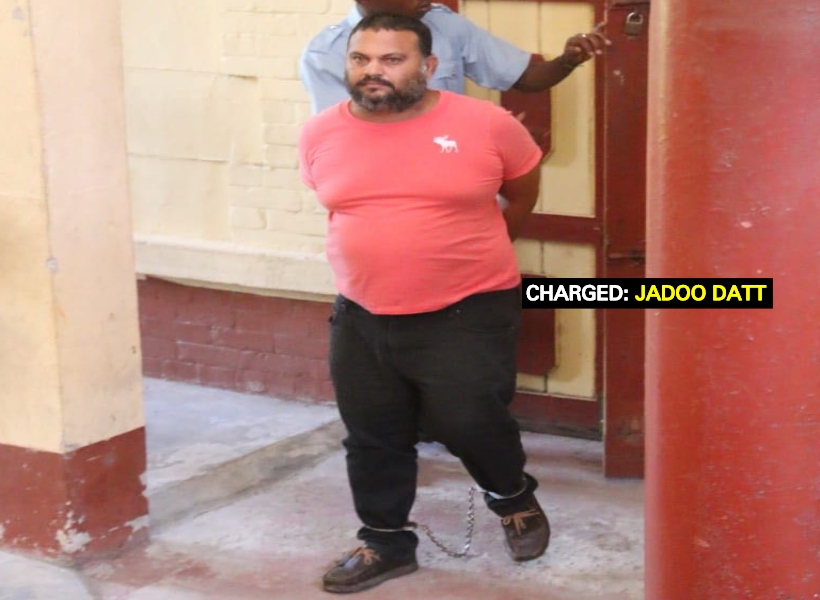 Facebook
Twitter
Google+
Pinterest
WhatsApp
A man, who was wanted by the Special Organised Crime Unit (SOCU) for questioning in relation to collecting millions of dollars by way of withdrawals from the Lotto Fund, was late this afternoon charged with entering Guyana illegally.
Jadoo Datt, of 64 Sheriff Street, Campbellville, appeared before Chief Magistrate Ann McLennan in the Georgetown Magistrates’ Courts.
He pleaded guilty to the charge which stated that on July 4, at Springlands, Corentyne, Berbice, he entered Guyana by sea and disembarked without the consent of an immigration officer.
Facts presented by Police Prosecutor, Gordon Mansfield stated that on May 16 a wanted bulletin was issued by SOCU for the defendant in relation to the lottery fund fraud. This was after intense investigation.
It was reported that immigration records revealed that Datt left Guyana on May  15 via Moleson Creek.
The prosecutor added that on July 4 Datt, reported to SOCU and there he was arrested and taken into custody.
Datt, in his explanation to the court, stated that he went into the US Embassy to get his visa but was denied same.
He added “I told my sister the Embassy turned me down and she told me I have to come to Suriname because police looking for me.”
The Chief Magistrate, after listening to Datt, reprimanded and discharged the matter.
Soon as Datt exited the prisoner’s chute, he was escorted by a police officer to a vehicle and was taken back to SOCU.
According to information, SOCU is currently investigating some questionable payments from the Lotto Fund, which was established under the People’s Progressive Party/Civic, and controlled by what was then known as the Office of the President.
The fund was to be used for specific purposes. However, a forensic audit raised questions about spending under the PPP/C.
Monies expended were supposed to fund health and other emergencies.
Datt reportedly signed for cheques for millions of dollars.
Investigators from SOCU reportedly have no idea why Datt collected those cheques. Hence, a wanted bulletin was issued for his arrest.
It was reported that Datt is one of several persons who signed payments issued by the Lottery Control Commission, which has responsibilities over the Lotto Fund. Those cheques were to the tune of millions of dollars.