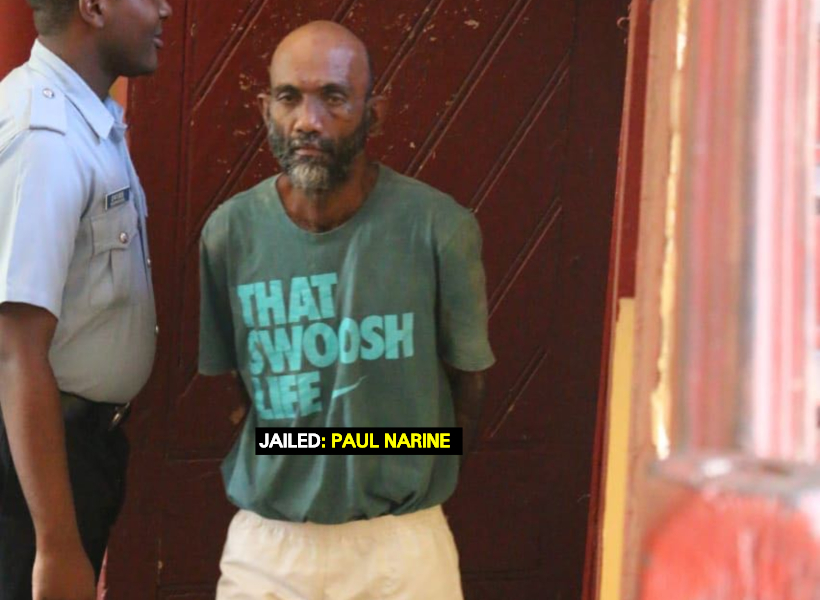 A man, who police caught sleeping on a bed wearing sneakers he stole, was today jailed for 24 months.

He was arraigned on a charge of break and enter and larceny.

It is alleged that between July 6 and July 8, at Lot 31 Ketley Street, Charlestown, Narine broke and entered the dwelling house of Onika Sandiford and stole two gas cylinders valued $20,000 and other articles totalling $70,000.

The man, in his explanation to the court, stated, “She got all her stuff back. She is a damn liar and a thief. That’s not even her house that’s her mother’s house.”

The man added, “I have never hit a woman before but I think I might have to hit this woman, she too damn lierd (sic). I feel no guilt and I have no remorse. I had all right to sleep on the bed because nobody ain’t went home.”

Facts presented by Police Prosecutor, Quinn Harris stated that on July 6, last, at about 18:30 hrs the victim secured her home and went out.
On July 8 at around 20:00 hrs the victim returned home and discovered several wooden bars from her home missing. The woman then checked her bedroom after she heard what appeared to be someone snoring. It was then she saw the defendant sleeping on the bed with her mother’s sneakers on his feet.

The woman then became afraid and went to the station where she reported the matter and a police rank accompanied her home.

The defendant was arrested while he was seated on the bed fixing the sneakers.
Narine, when asked by the Magistrate why he was in the victim’s house, stated “I was there to sleep. I ain’t get time I was only asleep for 20 minutes.”

The Magistrate, after listening to the Prosecutor facts, sentenced Narine to 24 months imprisonment.