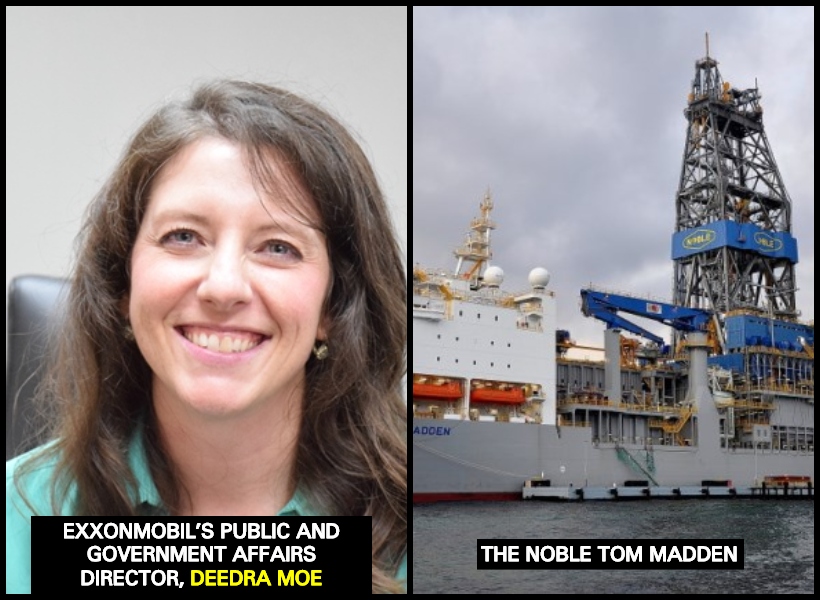 The Noble Tom Madden will be in Guyana later this year to begin exploration drilling in the southwest area of the Stabroek Block.

ExxonMobil’s new Public and Government Affairs Director, Deedra Moe made this known to the Department of Public Information (DPI) today. She said that the vessel will supplement exploration drilling being done by the Stena Carron. ExxonMobil has had an 80 percent success rate in its offshore exploration, with the most recent discovery in Longtail field.

Moe said the company is “finishing up” work at the Longtail field and an evaluation of the find is expected sometime next week. It is expected that the estimated value of the Stabroek Block will increase following the evaluation of Longtail.

“We’re still saying 3.2M [barrels oil equivalent] but that is what they are looking to update,” Moe cautioned.

As for Liza Phase one development, Moe said that the Noble Bob Douglas drillship has completed the first phase drilling of seven wells.  “They are going back in and doing the second phase so they are on track to do that.”

The US oil-giant has also submitted its development plan for Liza phase two to the government and it is expected to begin in 2023 pending the approval of permits and the company’s FID.

Moe takes over from Kimberly Brasington who has served in the position for more than two years. “I’ve a lot to learn but I am excited to be here,” she told DPI. She took over from Brasington at the start of the month.

Moe had worked with Exxon’s downstream operations in the United States before coming to Guyana. “I’m excited to be moving back into upstream where I’ve worked before … I really look forward to continuing the communications work that Kimberly and the team have done here,” she said. (Modified from the Department of Public Information)