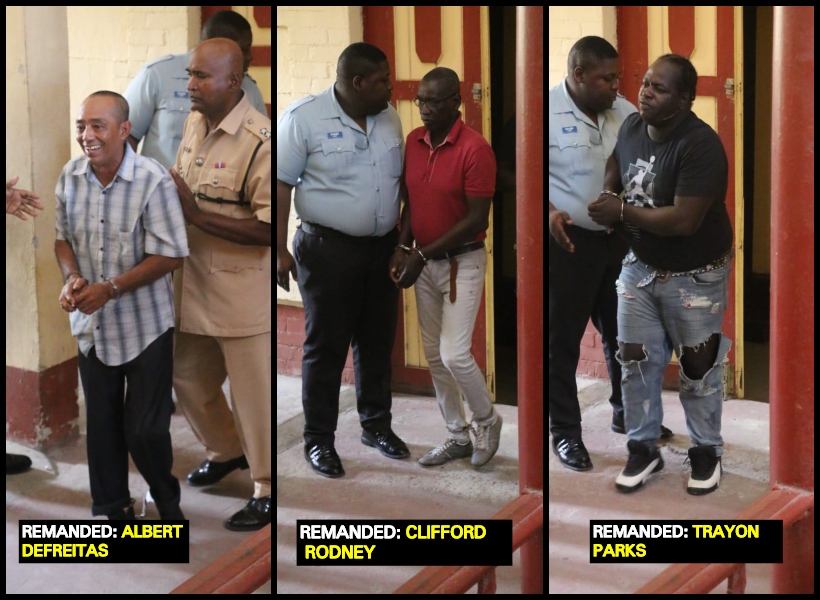 Facebook
Twitter
Google+
Pinterest
WhatsApp
Three vendors, who operate stalls at Stabroek Market, were today remanded to prison after being accused of breaking into L Seepersaud Marjar jewellery store and carting off with $22M worth of jewellery, diamond and money.
Clifford Rodney, 66, of 265 One Mile, Wismar, Linden; Albert De Freitas,55 ,of 100 Leopold Street, Werk-en-Rust and Trayon Parks, 31 of 107 Eccles, East Bank Demerara, appeared before Chief Magistrate Ann McLennan in the Georgetown Magistrates’ Courts.
The trio was not required to plead to the charge which alleged that between July 2 and July 3, 2018 at Stabroek Market, they broke and entered the jewellery store of L Seepersaud Maraj and stole a quantity of gold and diamond jewelry valued $20M and $2M cash.
The lawyers representing the defendants told the court that their clients endure days of torture while in police custody.
They added that officers placed black bags over their client heads and shocked them several times about their bodies forcing them to confess.
The lawyers added that they were also informed that police ranks took objects and smash their clients testicles repeatedly.
However, Police Prosecutor Neville Jeffers objected to bail being granted to the defendants citing the serious nature of the offence and the value of the articles.
The prosecutor added that all three of the defendants are known to the police since they all have pending matters of similar nature in the Georgetown Magistrates’ Courts.
The prosecutor went on to tell the court that if bail is granted to the defendants they would not return to court for the trial.
The court heard that Rodney and Defrietas admitted in a recorded interview to cutting open the safe while Parks helped pack some of the items that were in the store.
It was said in court that CCTV footage showed the defendants entering the Sleep Inn hotel where they allegedly split the jewellery.
The Magistrate, after listening to the Prosecutor, told the the defendants that the prosecution has strong evidence against them, hence she remanded them to prison.
They were instructed to make their next court appearance on July 23.