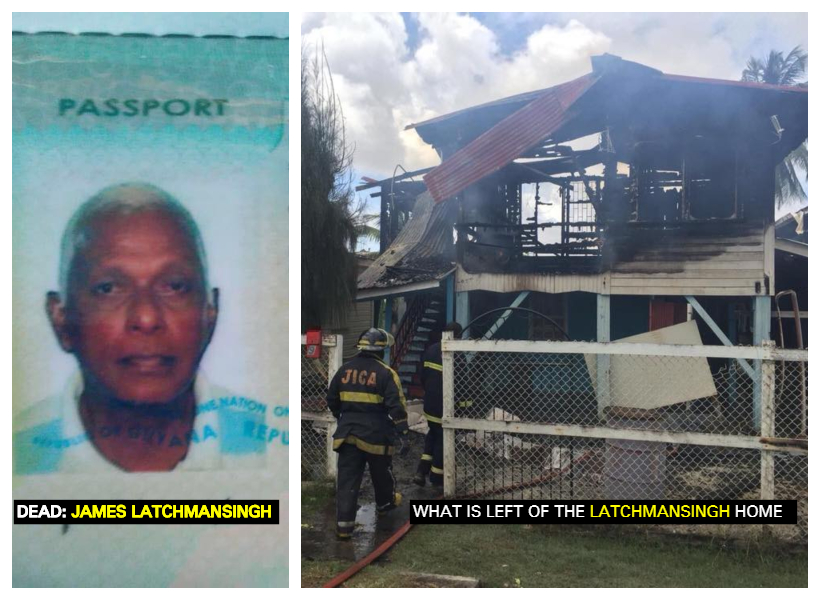 A 73-year-old man died around 11:30 hrs this morning after his son allegedly set their Bush Lot, West Coast Berbice (WCB) home on fire.

The dead man has been identified as James Pertab Latchmansingh. His burnt remains were discovered in the kitchen area of the two-storey house.

The victim’s son, a drug addict has since been arrested. It is alleged that he (victim’s son) set the house on fire after his father refused to give him money to buy drugs.

The Guyana Standard was informed that the young man was seen running out from the yard—and—shortly after, smoke was seen emanating from the kitchen.

Having seen the smoke, neighbours rushed to the house to assist Latchmansingh since he was confined to a wheelchair. But by this time, fire had already engulfed the building—making it impossible for anyone to get in.

By the time firefighters arrived, it was too late to save anything. It was reported that the suspect was seen staring at the house, as it burned to ashes. He was arrested at the scene.

According to information received, the suspect has threatened to burn the pensioner in his house several times in the past whenever he (victim) refused to give him money to buy drugs.

Neighbours claimed that the suspect has even assaulted the pensioner in the past for money. The two men were heard arguing with each other hours before the fire.

This news agency was informed that no one reported hearing the pensioner screaming—and as such, it is speculated that the suspect might have injured the victim before setting the house on fire.

Detectives have visited the scene and taken statements from eyewitnesses as they continue to investigate.