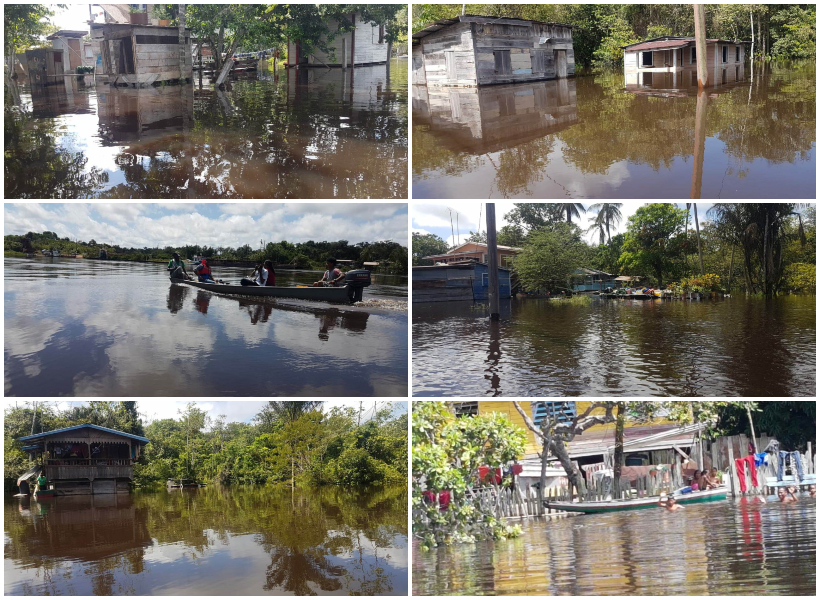 As part of its Regional Disaster Risk Management strategy, the Civil Defence Commission (CDC) yesterday conducted an initial assessment of the flooded areas in the Kwakwani community.

Led by Director General of the CDC, Lt. Col. Kester Craig, the team included representatives from the Ministry of Health, Hydrometeorological Service, and CDC volunteers.

Craig explained that the multiagency approach is one that is designed to ascertain the overall needs of the affected residents.

“We’re doing an assessment to see the impact of flooding in Kwakwani, particularly Lamp Island and the Waterfront area. What we would have observed is that the water level is about 6 – 7 feet and affected several homes and also farms.”

He added that the flooding is a regular occurrence which has resulted in the residents adapting to their environment. The residents have built secondary houses on high stilts which are just above the water height.

However, he said, this does not take away from the fact that the affected residents will have needs that must be catered for such as health and food. Lt. Col. Craig said he is awaiting information from the community.

“What is critical now is getting the data in from the community and to determine what are the immediate needs but in my opinion, I think we need to continue to monitor the water level, persons need to continually ensure the water they drink is safe and the assessment will come from the region to decide where resources will be focused on and how much will be required.”

The CDC has a data-driven response system in place to prevent the misuse of resources. Currently, there have been no reports from the local health authorities of any illness, however, since this is a regular occurrence, it has been previously reported that health concerns are raised after the water recedes.

The CDC’s initiative was welcomed by the regional representatives. So far, approximately 300 households have been affected. These are located at Waterfront, Lamp Island, Aroraima and Ginger Island.

The CDC will deploy resources as soon as the official community report is completed.

Meanwhile, the parliamentary opposition, the People’s Progressive Party/Civic (PPP/C), is calling on the administration to work faster.

“The PPP expresses its concern regarding the flood situation in Kwakwani, Region Ten, where residents have been faced with untold suffering as a result of the accumulation of water in their homes and villages. This has been compounded by the deterioration of roads, bridges and other critical transportation infrastructure across Region Ten. The party is, therefore, calling on the APNU+AFC Government to take all measures that will bring speedy relief in an effort to alleviate the situation.” The party noted in a release earlier today.