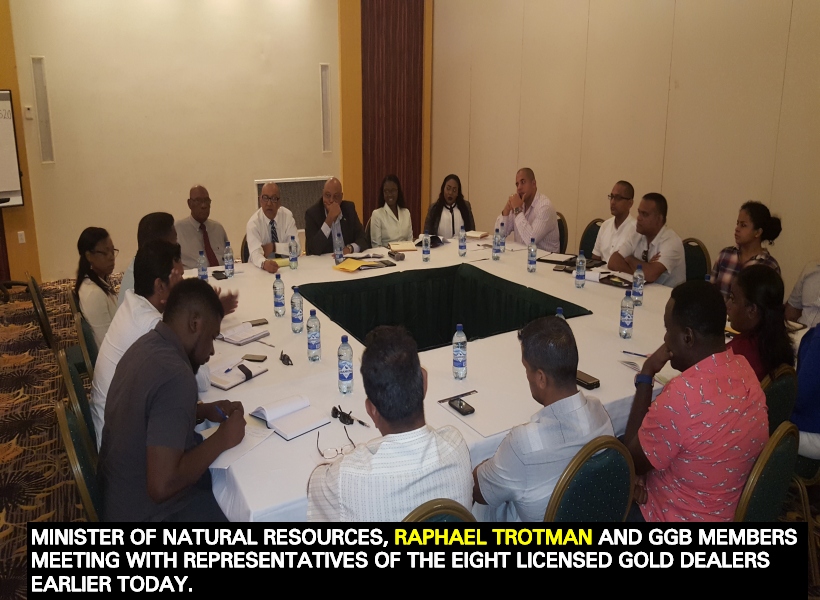 Some of the proposed amendments to the Guyana Gold Board (GGB) Act and Regulations, entails the introduction of a special dealer’s licence, and changes to the quantity of gold that may be legally possessed by a person.

Minister of Natural Resources, Raphael Trotman made this revelation when he met with representatives of the gold industry earlier today.

The meeting took place at the Pegasus Hotel. Along with the Minister were the Board of the GGB led by Chairman GHK Lall and General Manager Eondrene Thompson. The Board’s Legal Officer, Stacey Weever was also present.

Other proposed amendments include: an extension of the period within which a producer may legally possess gold before selling to the Guyana Gold Board; the introduction of a special dealer’s licence to possess, sell or export gold and the ‘fit and proper’ criterion to be applied to persons seeking this; the increase of application fees, bonds, fines and penalties; new regulations related to the acquisition of foreign exchange and the strengthening of the gold
trading regime.

The discussions were deemed fruitful with a number of compromises made on both sides to ensure that the views and positions of all stakeholders were given due consideration.

The frank discussions made for a good understanding of the challenges and expectations of both the Government and the licenced gold dealers.

Minister Trotman undertook to brief his Cabinet colleague, Minister of Finance Winston Jordan on a number of positions the dealers would have laid out with a view to reaching a final position that could see the passage of the proposed amendments in the National Assembly after consultations with the licenced gold dealers.