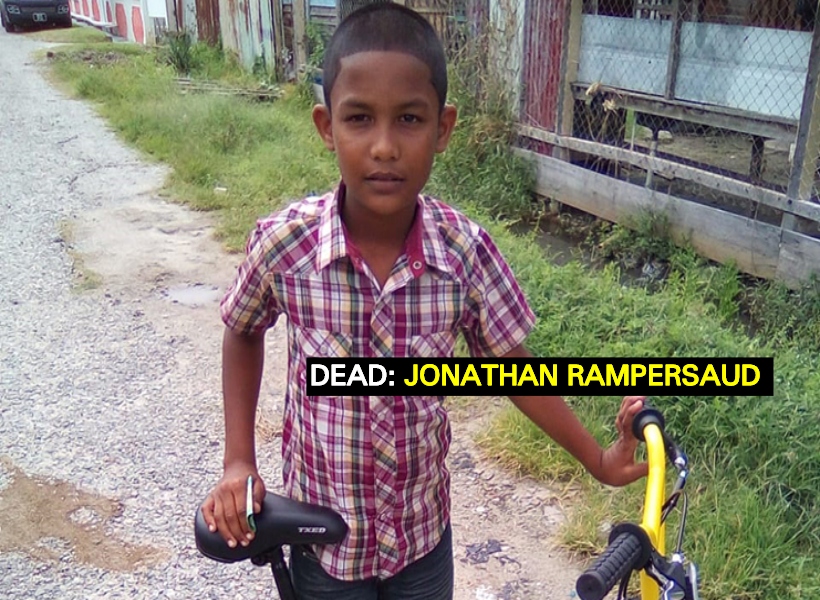 The step-father of 10-year-old Jonathan Rampersaud was released from police custody this morning.

Rampersaud is the child who was found hanging from his parents’ Success, East Coast Demerara (ECD) home on Wednesday afternoon.

Balram Basdeosingh was freed after a post mortem examination revealed there were no signs of foul play in the lad’s death as was suggested by relatives of the deceased.

The Guyana Standard has been informed that a post mortem examination performed on the child’s remains early this morning by Dr. Nehaul Singh revealed that he indeed hung himself.

“The doctor did all the examination he could have done on the child because of the allegations but he did not find anything to suggest foul play,” a senior police source said.

The lad’s body was found hanging by the neck from a sheet in the house. He was left in the care of his step-father, who relatives claimed, was under the influence of alcohol. The boy’s mother, Ameena Hamid was at work at the time of his death.

Hamid told this news agency that she received a call from someone who informed her that something had happened to her son. The woman said that she rushed home only to find the 10-year-old hanging from a sheet in his bedroom.

The lad’s death took Hamid by surprised. She said that prior to her leaving home for work on Wednesday morning; he was playing in the yard. He had even begged that she take him with her to work.

The Guyana Standard was told that the little boy was constantly abused by his step-father, who was under the influence of alcohol most of the time. This was confirmed by at least two neighbours.

However, his mother refuted these claims and insisted that the two shared a good relationship.

The child’s father, Karan Rampersaud on the other hand, is still insisting that the stepfather played a part in his son’s death. He said it was only after his son was discovered dead that neighbours related the constant abuse the lad was experiencing at the hands of his step-dad.

Rampersaud said that had he known what his son was going through, he would have removed him from his mother’s house. He claimed that the little boy never acted strange or mentioned the abuse to him or any other relatives.