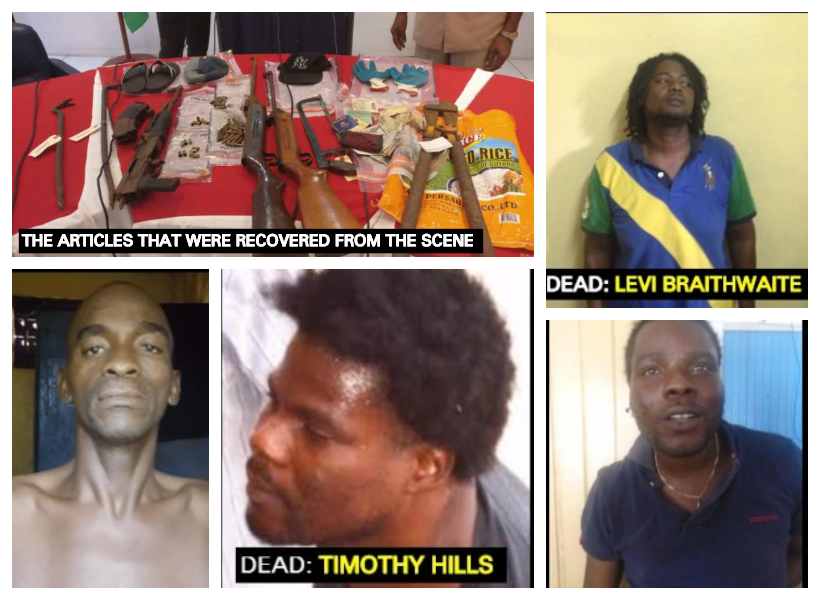 Detectives probing the attempted robbery this morning at Liliendaal, East Coast Demerara (ECD) where five bandits were killed, believe that a former caretaker tipped off the suspects about a safe that was hidden inside the house.

That caretaker quit his job three months ago. The safe was reportedly installed at the property—owned by an overseas-based Guyanese, just before he (caretaker) left the job.

The Guyana Standard has been informed that just before the former employee left his job; someone had broken into the property and stole most of the household items, including a television and chair set. He resigned before he was asked about the items.

The owner of the property who resides in Florida, USA,  reportedly told the cops that he had suspected his former employee of the break and enter.The police believe that the former employee might have provided the bandits with the information about the safe, including details of how they could have entered the house.

According to information received, at around 02:45 hrs, the five heavily armed bandits used a torch to cut open the gate. The present caretaker woke up to the noise and immediately contacted the police through 911.

This news agency was told that when the police arrived, they parked a few meters away from the scene and walked to the property. At that point, the bandits had already broken down the back door and were about to enter.

“Two of them went at the door and when they see the police, they opened fire and ranks returned fire. By this time, the two at the front run to the back and start open fire. The ranks took cover and they were eventually killed. The fifth bandit was killed in the house,” a police source said.

Three guns including an AK-47 rifle with two magazines were found at the scene.

Meanwhile, the Police Commissioner (ag), David Ramnarine this morning commended his ranks for their bravery at a press conference. He said that their actions this morning will not go unnoticed as it was highly commendable.

Regarding the five bandits who were killed, the acting commissioner said that at least three of the men had a long criminal history.

In 2015, St Hill was arrested and charged with unlawful possession of firearm and ammunition; in 2016 with possession of narcotics; in 2017 with attempted robbery and break and enter and larceny, and in 2018 with setting fire to the Diamond/Grove Police Station.