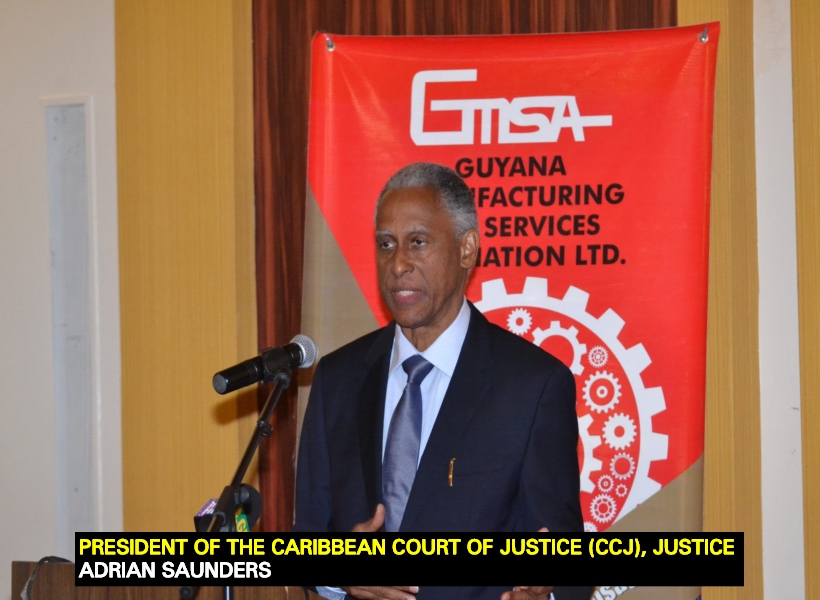 The independence and proper resourcing of the judiciary, respect for human rights, among other factors, will be crucial to the success of Guyana’s burgeoning oil and gas sector.

This point was made last night by Justice Adrian Saunders, the new President of the Caribbean Court of Justice (CCJ). At a luncheon that was held by the Guyana Manufacturing and Services Association (GMSA) at the Pegasus Hotel, Justice Saunders said that the administration must ensure that the judiciary has all that it needs to carry out its mandate, that is, to ensure justice is served for matters that will arise in the new sector.

Justice Saunders cautioned that the economic progress that is about to hit Guyana can be thwarted or it can be significantly enhanced with good governance and faithful adherence to the rule of law. He said, “The rule of law in this sense implies legal accountability, fairness, respect for minorities, the observance of human rights, judicial independence, separation of powers and equality.”

Justice Saunders also pointed out that ultimately, the people will look to the CCJ and the courts in Guyana for setting appropriate standards in matters that may arise. “In a multicultural and multiethnic society as Guyana is, those courts will have a special responsibility to ensure equality of treatment.”

Further to this, the CCJ President said that adherence to the rule of law will increase business confidence and ensure respect for property rights and freedoms of the citizenry. An important feature of the rule of law, Justice Sanders reminded, is ensuring proper access to the courts and justice. He opined that the CCJ has an enormous stake in this goal.

Several local critics have questioned the preparedness of the judiciary and it is being properly resourced to handle matters relating to the oil and gas sector. This would come on the backdrop that ExxonMobil has faced a wave of litigation over the years for matters relating to abuse and corruption.

In the case of Chad, ExxonMobil was fined US$74 billion as it was ruled in the courts that the nation was underpaid the royalties it was entitled from the oil giant. The fine was handed down on October 5, 2016. ExxonMobil had disagreed with the ruling and refused to pay up. It was only until earlier this year, after several appeals by international bodies that it honoured the ruling.

Given ExxonMobil’s history in the foregoing case, and others around the world, critics believe that it would not be impractical for Guyanese to question whether the state is preparing the legal framework to deal with the worst to come with the oil and gas superpower.