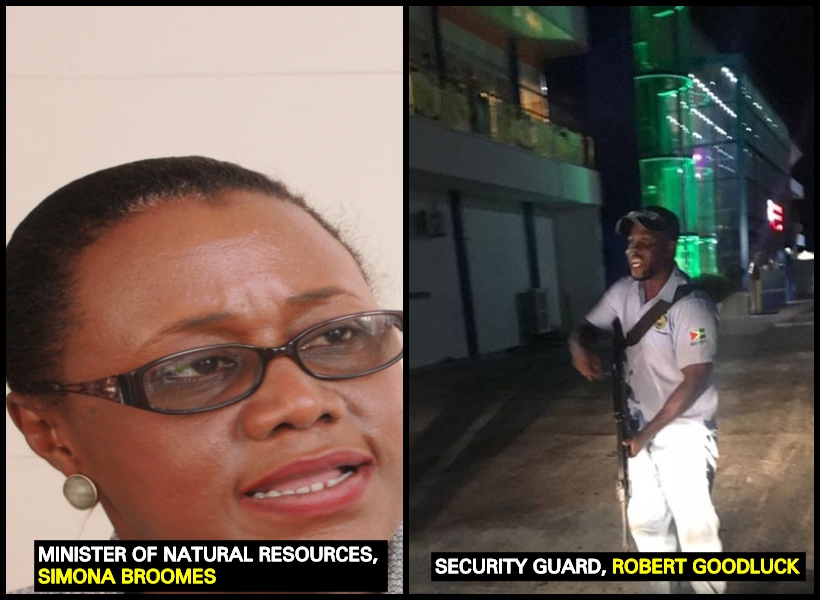 The Guyana Police Force (GPF) has revoked the gun licence of one of the security guards who was involved in a confrontation with Junior Minister of Natural Resources, Simona Broomes and her driver on July 9, last.

The fiasco occurred at a Providence, East Bank Demerara (EBD) establishment. The guard, who is currently at the center of attention, has been identified as Robert Goodluck, called “Wren.” The second guard is Josh Ramroop.

The Guyana Standard has been informed that the confrontation with the Minister led to the Guyana Police Force conducting an investigation into the two guards who were involved in the “buse-out” with the minister and her driver.

As a result of the probe, Goodluck’s criminal history in the United States of America was unraveled. Nineteen years ago, Goodluck was convicted for manslaughter, drug sale and possession of an illegal firearm.

He was then deported to Guyana after serving his time. Since arriving here, he worked with the KGM security services and a high powered weapon was given to him.

Now, several questions have been raised about the efficiency of the screening process used by the Guyana Police Force when granting gun licenses.

Early last month, the Minister’s driver was about to park in a restricted area at the Providence establishment when they were prevented by the two security guards. This led to a heated argument between the guards, the minister and her driver. The police were called in and both guards were detained for several hours after the Minister claimed one of security personnel pointed a gun at her.

Surveillance footage however cleared the guards. The footage showed the minister and her driver throwing around “No Parking” signs when they were informed that they could not park in the area.

At one point in the video, Minister Broomes’ driver attempted to pull out his weapon, but was urged not to by his boss.

Since the release of the footage, the Minister has come under fire for lying and causing the guards to be detained unnecessarily. Her colleague, Minister of Health, Volda Lawrence has since apologized to the two men.

The Minister has however refused to speak on the issue by saying, “I don’t know what you are talking about” when quizzed by reporters.