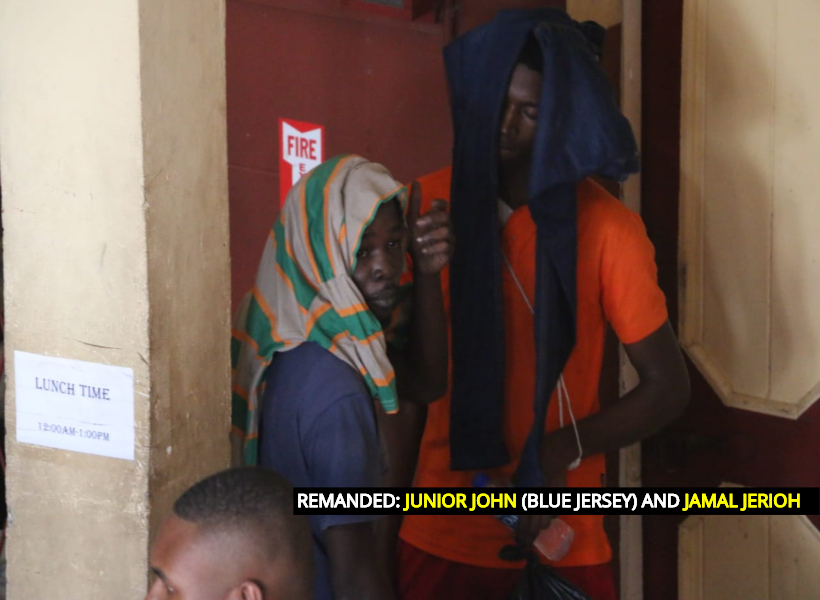 Facebook
Twitter
Google+
Pinterest
WhatsApp
Following a shooting incident on Emancipation Day whereby two men allegedly shot at two Police Constables, the alleged assailants were this morning charged and remanded to prison.
Then men, Jamal Jeriah, 21, of Lot 237 B Albert Street, Queenstown, Georgetown and Junior John, 32, a father of one, of East La Penitence, Georgetown were arraigned before Chief Magistrate Ann Mc Lennan.
They were jointly charged along with former murder accused Carlton Bourne.
However, Bourne, who was yesterday remanded to prison on three counts of robbery under-arms, was absent from court this morning.
Particulars of the charge against Jeriah and John alleged that on August 01, 2018, they along with Bourne, discharged a loaded firearm at Police Constables Royston Mendonza and Lester Lewis, with intent to maim, disfigure, disable or cause them greivous bodily harm.
The shooting occured at John and Chapel Streets, Georgetown.
They were not required to plead to the indictable charges which were read to them in the Georgetown Magistrates’ Court.
Police Prosecutor, Gordon Mansfield told the court that Jeriah was shot to his shoulder by police after it was alleged he opened fire on them.
According to the Prosecutor, Jeriah received medical attention at the Georgetown Public Hospital Corporation, where he was admitted as a patient under guard.
Attorneys-at-Law Paul Fung-a-Fat and Kezia Williams represented John and Jeriah respectively. Both of them requested for their clients to be released on bail.
However, the prosecutor opposed to bail.
The Chief Magistrate remanded both defendants to prison until August 27, 2018, when Bourne is expected to appear in court to answer to the charges.
Before the said Magistrate Jeriah faced charges for unlawful possession of a gun and several rounds of ammunition.
Particulars of the charges alleged that on August 01, 2018 at John and Chapel Streets, Georgetown, he had a .357 revolver and four rounds of matching ammunition in his possession when he was not the holder of a firearm license enforced at the time.
Jeriah denied the allegations and was further remanded to prison.