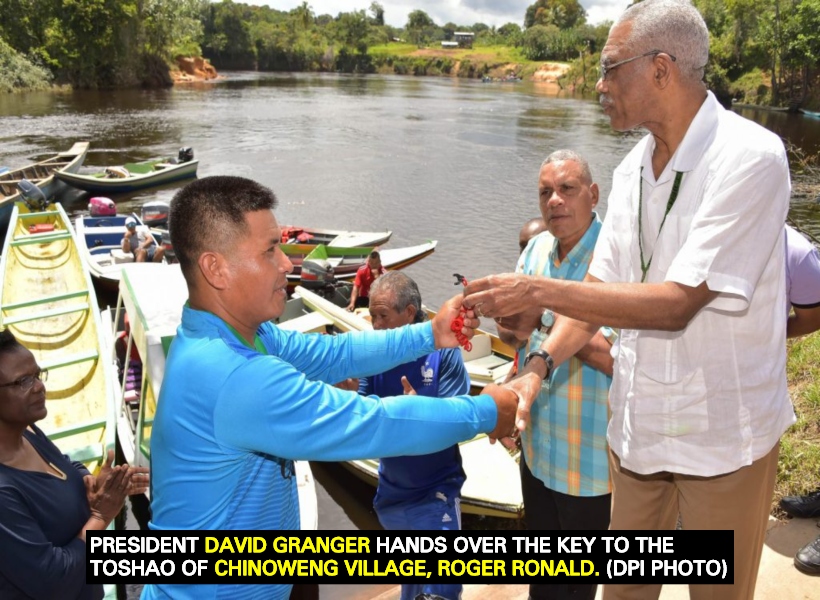 The “Five Bs” initiative began some three years ago, and since then, President David Granger has donated 27 buses and 14 boats to aid the transportation of school children across Guyana.

These donations were all made possible through contributions from private sector persons. Last Sunday, President Granger handed over a new $1.3Million boat and engine to the Village of Chinoweng in Region Seven, Cuyuni-Mazaruni.

Giving remarks before the presentation to Toshao Roger Ronald, the Head of State recalled the road which led to the initiative back in 2015.

“Three years ago, when I entered office after a very long campaign, I went into many rivers and one of the important things I noticed was that many children were not going to school because they didn’t have transportation and we started in 2015 what we called three “Bs’,” the president told villagers.

He said so far, the programme has acquired 27 buses and 14 boats which he noted, will help children attend school free of charge. He reminded that in communities that have roads, children are given bicycles.

Just last week, while celebrating Emancipation with villagers at number 53 village on the Corentyne, the Head of State donated another 25 bicycles to children along the Corentyne Coast.

“The most important thing about this boat and I am reminding Chinoweng is that children must go to school. Children must not be kept away from school.  I am proud of this presentation,” the Head of State told residents.

The donation was made possible through Beverly Tapp of B& J Civil works, in observance of her company’s 25th anniversary. Tapp said, “I decided that we are going to donate a boat (and engine). I just want you to use it safely and care it,” she said, noting that the business community is “here to support the people”.

The contribution came at a time when the village is participating in the annual Upper Mazaruni district games in Waramadong. (Modified from the Department of Public Information)