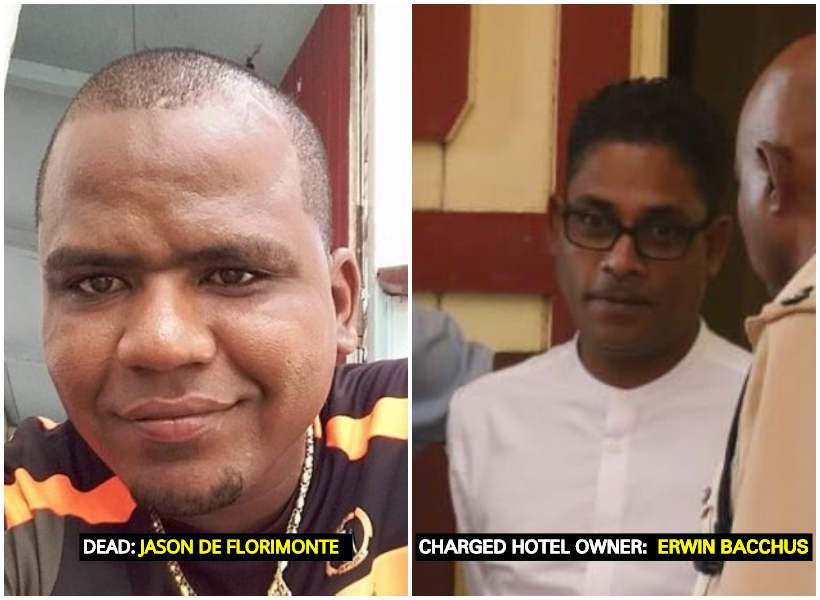 The owner of the Tourist Villa Hotel, Erwin Bacchus, was this afternoon placed before the Georgetown Magistrates’ Courts where he was charged with manslaughter and released on $1.5M bail.

Pandemonium soon after erupted when relatives of the dead man—Jason De Florimonte—exited the Chief Magistrate Courtroom and began shouting for justice.

The wife of the deceased, with tears rolling down her eyes, exclaimed,  “wha the rass gone happen to me two sons now! Look how he kill an innocent man and get bail.”

The woman, who fell several times, had to be comforted by family members who were all crying.

Bacchus was not required to plead to the charge which alleged that on August 4 at Subryanville, Kitty, he unlawfully killed De Florimonte.

The businessman was represented by Attorneys-at-law Nigel Hughes and Glen Hanoman.

Hughes, in a successful attempt to secure bail for his client, told the court that his client has never been charged before.

The lawyer went on to tell the court that on the day of the incident, his client was merely trying to defend himself after he was attacked by the now dead man who was armed with a knife and a rolling pin.

Hughes stated that a handyman that works for his client saw De Florimonte abusing a woman outside the hotel and went to the woman’s rescue.

De Florimonte then turned his attention on the handyman who in an attempt to save his life ran into the hotel where he met with Bacchus.

The court heard that after De Florimonte began to stab at the handyman, Bacchus who is a licensed firearm holder, in an attempt to intervene fired two warning shots in the air. De Florimonte then turned his attention to the businessman.

Hughes told the court that his client, in an attempt to protect his life, shot De Florimonte once in the chest and fired two more shots while he was advancing towards him.

However, facts presented by the court prosecutor differed from that of the defence.

Prosecutor Vivian Adolph stated that around 01:30 hrs on the day in question, De Florimonte was seen abusing a female and a handyman went to part them. Soon after, an argument ensued between them.

The court was told that De Florimonte began attacking the handyman with a knife and rolling pin.  It was then that Bacchus fired several shots at De Florimonte causing him to sustain injuries.

Adolph had no objection to bail being granted to the businessman but asked that it be in a substantial amount and that conditions be attached.

The Magistrate, after listening to the prosecutor, released the accused on $1.5M bail. She also instructed him to report every Monday and Friday to the Kitty Police Station until the hearing and determination of the Preliminary Inquiry (PI).