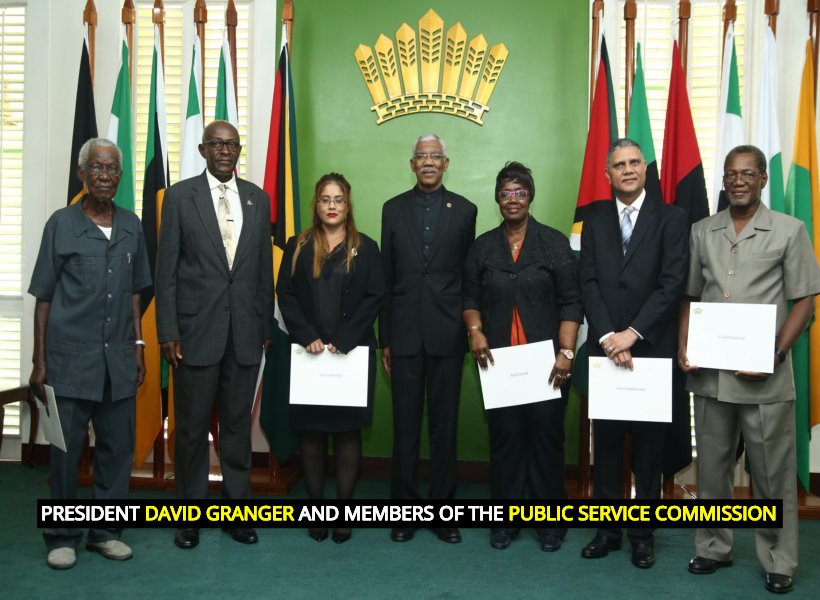 Six persons were today sworn-in by President David Granger to serve for a period of three years as members of the Public Service Commission (PSC).

President Granger, in his remarks, said that public servants must be allowed to work without “fear or favour, partiality or prejudice” and their careers uninterrupted by a change of government or for political reasons.

In this vein, he urged the Commission to ensure the establishment and existence of such a public service by insulating it from political interference, as prescribed by the Constitution of Guyana.

The president assured that “the days of fear have passed,” with the swearing-in of the Public Service Appellate Tribunal last year and the Public Service Commission this year is evidence of his administration’s determination to establish and maintain a professional public service.

“This ceremony reaffirms our respect for the independence and for the commitment to support the work of the Public Service Commission. The Public Service is essential to maintaining public trust in governance,” he said.

The Head of State emphasised the importance of a proficient and professional public service to the country’s development.

Public servants, he noted, are essential to the country’s administration, as they exert direct and daily influence on the lives of Guyanese, through various boards and agencies.

The president also touched on the issue of public trust and the ability to be impartial.

“The Public Service, to enjoy public trust and to achieve its administrative objectives, must be composed of men and women of intelligence, integrity and impartiality. They should be allowed to work …without fear [or] favour, partiality or prejudice. They should look forward to careers based on the principle of merit. Their employment should not be threatened or interrupted for political reasons or upon a change in government,” he stated.

The Chairperson and Deputy-Chair will be selected by the commission.