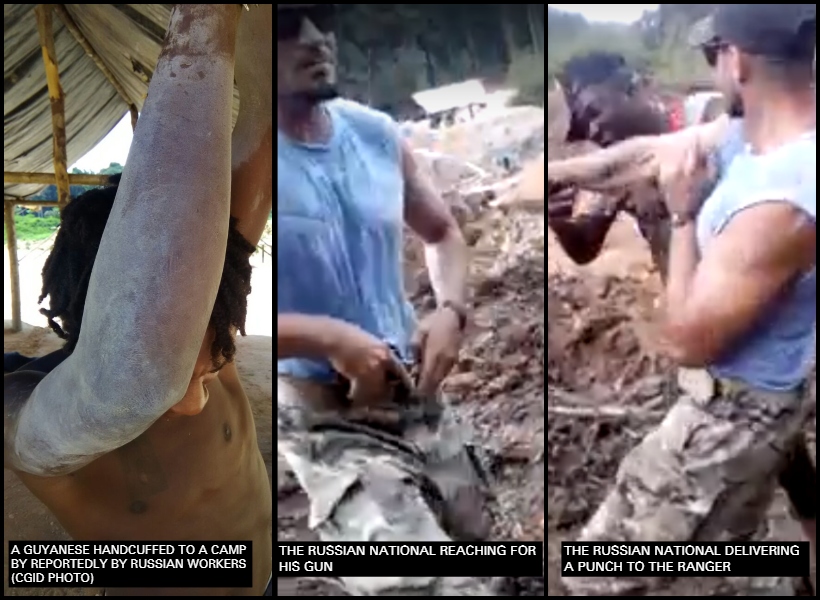 Facebook
Twitter
Google+
Pinterest
WhatsApp
One of two Russian security guards was arrested Tuesday afternoon after a video of him beating and punching a Guyanese miner at a mining camp in the Quart Stone River in Region Seven went viral.

Two of his accomplices managed to escape from police ranks who were sent to the area after the footage, taped by one of the foreigners, was released.

According to information received, the local miners,Ken Edwards and Charles Clarke were executing their normal duties on their employer, Hopkinson Mining Logistics’ claim when they were confronted by the two Russians.

The Russians are allegedly employed by the West Bank Demerara Gold Inc. Based on the video footage, the foreigners attempted to prohibit the Guyanese miners from entering further up their employer’s claim. They then demanded documents to prove the claim belonged to Hopkinson Mining Logistics.

When one of the local miners refused to cooperate, a foreigner punched him in the face twice before pulling a gun on him and his colleague. This incident reportedly occurred April last.

In another incident, photographs showing what is assumed to be a Guyanese miner—handcuffed to an overhead rafter. He was standing with his head down. It seemed like the miner was tortured, possibly kidnapped and kept somewhere in the interior locations.

While the incident is being investigated by the Guyana Police Force, the Ministry of Natural Resources in a statement said that its Minister, Raphael Trotman, has instructed the Commissioner of the Guyana Geology and Mines Commission and the Director of the Corps of Wardens to launch a probe as well.

The Guyana Standard has been informed that additional police ranks will be sent to the area to hunt for the escaped Russian miners.