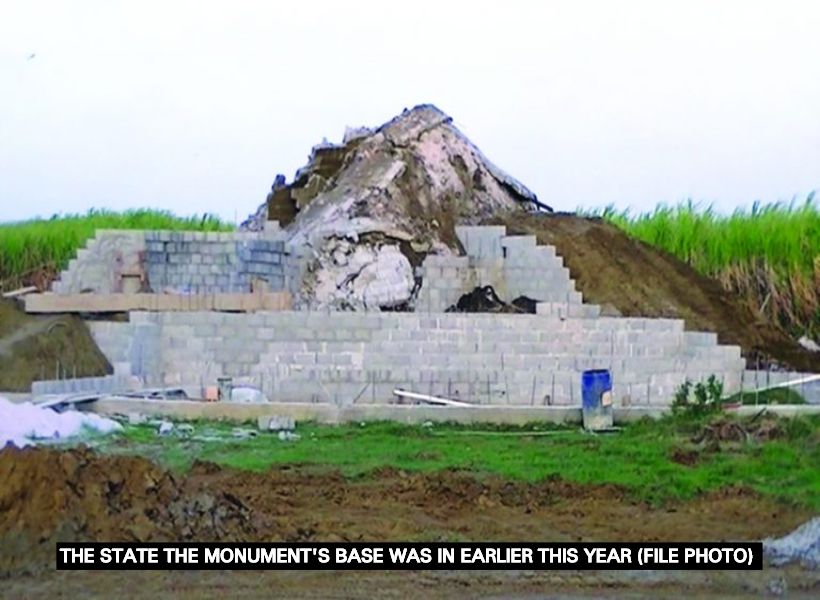 Following its collapse more than a year ago, government has awarded two contracts totalling $63.5M for the construction of the supporting structure for the Indian Immigration Monument located at Palmyra Village, Corentyne, Region Six (East Berbice/Corentyne).

Works have been slated to commence on Monday, and is expected to be completed by the end of October of this year.

This project entails the construction of the monument base and podium, as well as peripheral components including the walkway, landscaping details, internal drainage, roadway, lighting, visitor’s gallery, security hut and fencing.

Through the provision of roadway access and designated parking lots, the Ministry of Public Infrastructure (MPI) in a statement said that it trusts that this project will serve to enhance the area and attract visitors and locals as a national focal commemoration of our country’s ancestry represented in part by the East Indians who came to Guyana as indentured immigrants.
The scope of works for the project is subdivided into eight lots and are as follows:

* Lot 1- Construction of Monument Foundation,  Base and Podium

To date, two contracts have since been awarded to local companies for Lots 1 and 2 by the National Procurement and Tender Administration Board (NPTAB).

The contracts for the outstanding lots shall be awarded by the end of the third quarter of 2018 as works are ongoing, the ministry noted.

The base of the monument collapsed in April last year. Inquiries revealed that there was no geological study done prior to the construction of the base. This was coupled with shoddy workmanship.

Cabinet last year took a decision that MPI would assume responsibility for the oversight of the project.

According to previous reports, monies would have already been paid out to the previous contractors that did the shoddy work. It is still unclear if these monies were recovered, or if the amount being paid now reflects the inclusion of works that were completed by previous contractors.

Research done by the Guyana Standard, shows that by June 2017, the government would have paid out almost $60.6M to the previous contractors.

It is also unclear if the previous contractors were on the receiving end of any disciplinary action.

This 12×12 monument is sculpted in bronze and is a visual representation of ordinary Indian people in routine everyday life with each bearing a significant artefact as an ode to the continued traditions brought by forefathers from India translated to current livelihood and practices by Guyanese today.

The Ministry said that it will continue to update the public regarding construction works for the monument as the remaining contracts are awarded.