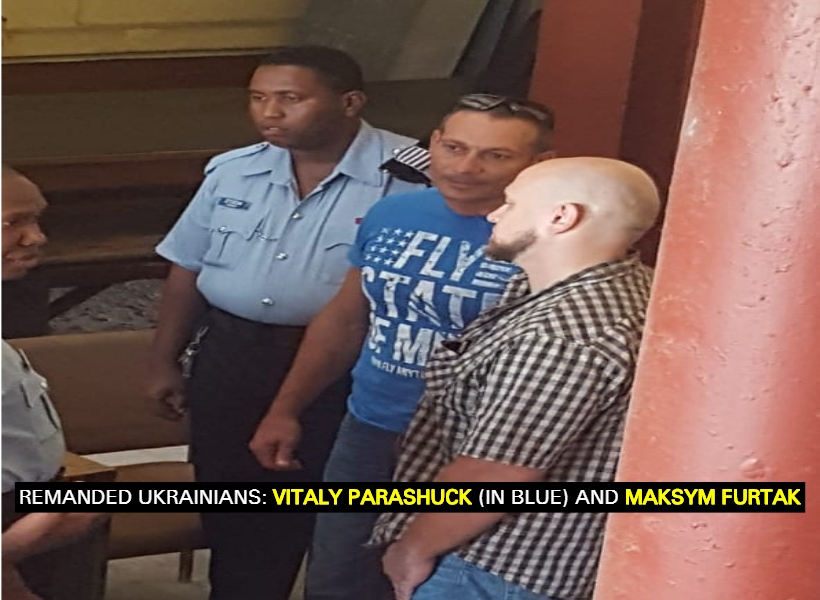 Two Ukrainian nationals were remanded to prison this afternoon after they appeared in the Georgetown Magistrates’ Courts and denied that they assaulted and threatened Guyanese mining rangers.

Charles Clark, a Guyanese, also appeared in court alongside them. The trio was charged over an incident which occurred over a week ago at Quarts Stone Backdam, Cuyuni River, Essequibo.

The Ukrainians, Vitaly Parashuck, 38 and Maksym Furtak, 33, of Bel Air, Georgetown were arraigned before Chief Magistrate Ann McLennan before whom they pleaded guilty to separate charges.

Both Parashuck and Furtak denied separate charges which alleged that on August 03, 2018 while being employed with the West Bank Demerara Gold Incorporated Security Service, as a Camp Coordinator and Security Officer respectively, they failed to wear uniforms while on duties.

Parashuck was charged for making use of threatening language to Clark, whereby a breach of the peace may have occasioned. It was further alleged that on August 03, 2018, he assaulted Clark so as to cause him actual bodily harm.

Furtak was charged separately for making use of threatening language to Rudolph Deen, whereby a breach of the peace may have been occasioned. The men pleaded not guilty to all the charges. They were remanded to prison.

Parashuck and Furtak were both represented by Attorneys-at-Law Keoma Griffith and Devindra Kissoon.

During a bail application, Griffith told the courts that his clients have been fully cooperating with police investigations. The lawyer added that prior to being charged; the men were released on station bail.

Griffith revealed that his clients were issued with work permits in 2011 which expire in 2021.

Meanwhile, Clark was released on $20,000 bail after denying a charge which alleged that on August 03, 2018 while being employed as a Security Officer, with the Hopkinson Mining Company Security Services, he failed to wear his uniform while on duties.

In the video, the Ukrainians were seen cuffing and drawing a gun on the ranger. The incident sparked the attention of the Guyana Police Force and the Guyana Geology and Mines Commission resulting in both organizations launching investigations.

As a result, ranks from the police force journeyed to the area where the incident allegedly occurred. All parties involved were arrested and charges were laid following legal advice.

Back in court, Police Prosecutor Inspector Gordon Mansfield strongly opposed to bail being granted to the foreigners citing that they do not have sufficient ties to Guyana.

According to the prosecutor, there is no evidence of the Ukrainians having addresses in Guyana. The prosecutor said that while the allegations leveled against them may seem frivolous, the alleged incident could have ended much more serious.

The prosecutor, however, had no objections to bail being granted to Clark, who was represented by Attorney-at-Law Eusi Anderson. Clark hails from Blueberry Hill, Wismar, Linden and had served in the Guyana Defence Force for over five years, according to his legal representative.

The trio is to make their next court appearance on August 23, 2018, when they will appear in the Bartica Magistrates’ Courts.