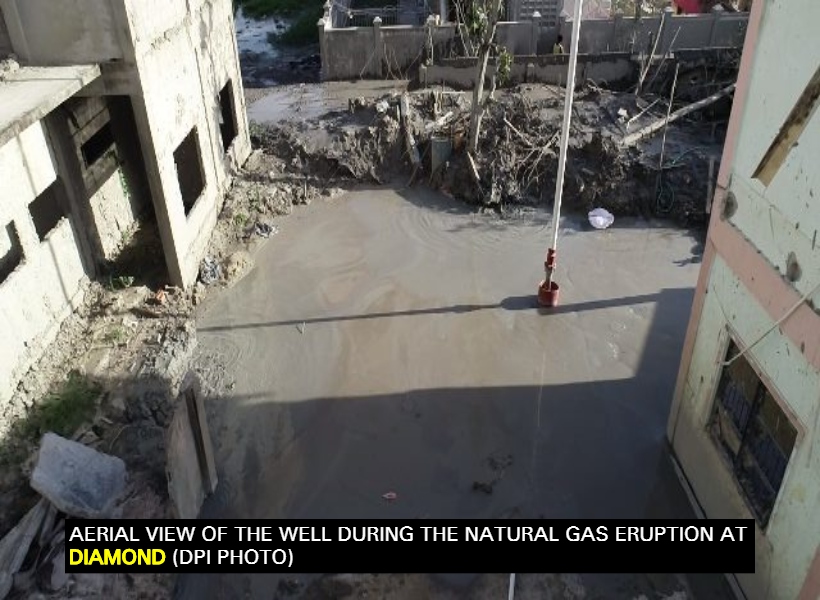 The explosion last June at Sixth Street Diamond on the East Bank of Demerara, which saw debris flying everywhere has a silver lining. The explosion came from a gas well located metres below the earth’s surface. Authorities now believe that the resource there can power the community and even provide cooking gas.

In fact, Director General (ag) of the Civil Defence Commission (CDC), Lt. Col. Kester Craig, said that several recommendations were received including the placement of a gas generator to provide electricity to the community or having a private investor collect the gas for commercial distribution.

This revelation comes after an assessment was conducted by the Environmental Protection Agency (EPA) and Massy, which ruled out the presence of excess amounts of methane gas in the atmosphere.

A sample of the methane gas was sent overseas to determine the quantity and potential.

A complete assessment – a report – will be submitted to Minister of State, Joseph Harmon for an executive decision to be made in this regard.

After June’s eruption, the well belched once again yesterday during the early morning hours, spewing debris up to 50ft in the air, consisting of mud, water, gas and small boulders on nearby houses.

The situation is presently under control and is continuously being monitored. Lt. Craig said the eruption of the well occurred around 01:30hrs, immediately following, the 24-hour National Emergency Operation Centre was contacted and a team dispatched to the location.

Officials from the CDC, Guyana Geology and Mines Commission (GGMC), the Guyana Police Force (GPF) and the Guyana Fire Service (GFS) were on the ground monitoring the situation.

Lt. Col. Craig explained that about two weeks ago engineers from the GGMC completed the initial capping.

This process entails what is known as “reverse welling” and involves the use of two sets of pipes, which are placed about 25 feet below the ground to trap the gas at the surface, “it involves using cement to seal around the pipes and the affected areas,” Craig noted.

From the assessment conducted yesterday morning by Senior Petroleum Technologist, GGMC Mitchell Prince, it was determined that an apparatus would have to be set up to capture the combination of gas, mud and water and then separate the gas from the mixture.

Prince, who performed the initial capping of the well, said this occurrence is normal and indicates that the well is clear. However, according to the Craig “we have to be careful with the size of the boulders coming out because the surface at the top has to be adequate for the release of the boulder from the well.”

The authorities are urging citizens to refrain from drilling wells without permission from the Hydromet Office to avoid a similar situation, which has resulted in significant losses.

Authorities are currently reviewing the laws to ascertain possible sanctions for the homeowner responsible for the eruption in June after he claimed to have been digging a domestic water well.

Nearby residents were assured that the situation is under control and a solution forthcoming following assessment.