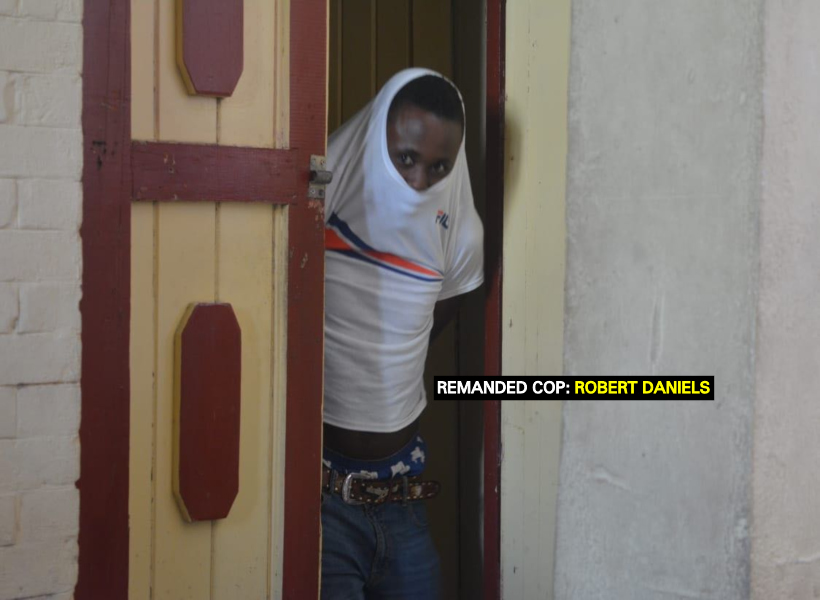 Facebook
Twitter
Google+
Pinterest
WhatsApp
“Y’all is a set of f$#%ing crosses,” an angry Police Constable, Robert Daniels said to his fellow police ranks who escorted him to court to face a murder charge.
With his eyes piercing through  a white t-shit, Constable Daniles, 23, of Victoria Road Plaisance, East Coast Demerara, appeared at the Georgetown Magistrates’ Court late this afternoon.
He was not required to plead to the indictable charge which read that on August 11, 2018,  at Puruni River Bank, in the Essequibo Magisterial District, he murdered Estevao Costa Marques, a Brazilian miner.
His lawyer, Patrice Henry, in his address to the court, raised questions as to the amount of gun shots.
He said that parties heard what appeared to be two gunshots.
However, the lawyer disclosed that an autopsy revealed that the dead man sustained one gunshot wound.
According to the laywer, investigations revealed that a round was missing from the firearm his client was carrying.
The lawyer is now arguing that since the findings of the autopsy, eyewitnesses have altered their statements to suggest that only one gunshot was heard.
Attorney Henry is contending that investigations in the matter were compromised, and that the case file must be sent back to the Director of Public Prosecution (DPP) for revision.
The lawyer pointed out that his client shot at the miner in self defence and as such should be charged with manslaughter.
According to reports, on the day in question, Daniels and a police corporal abandoned their post and went and conduct an unauthorized raid at a Camp where the now dead man worked.
It was stated that the murder  accused and his colleague joined a boat and proceeded to a shop, shorty after two loud explosions were heard.
Upon checking, the Corporal said he met with the Constable who relayed to him that Marques discharged a round at him and he returned fire at him, shooting him behind the head.
Reports also indicated that after the Police Constable  shot the miner, he and his colleague attempted to dispose of the dead man’s body.
Reports further indicate that one of them even tried to burn the body.
The Magistrate, after listening to the facts, remanded the accused to prison.
He was instructed to make his next court appearance on August 30, 2018 when he will appear at the Bartica Magistrate’s Court  for report.