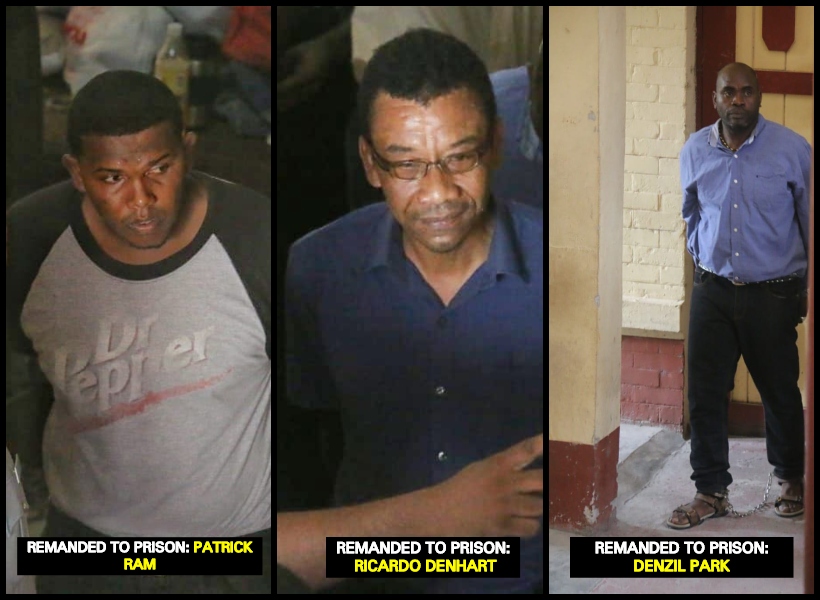 Following a well executed sting operation by ranks of Custom Anti Narcotics Unit (CANU),  four persons, including a juvenile, were busted transporting over 22 pounds of cocaine in two vehicles.

Denzil Park, 49, a businessman; Ricardo Denhart, 47, a taxi driver; Patrick Ram, 24, a minibus operator; and a 14-year-old, all of Corentyne Berbice, appeared before Chief Magistrate Ann McLennan in the Georgetown Magistrates’ Courts.

The quartet denied the allegation which stated that on August 14,  2018, at Popeye’s Fast Food Parking Lot, Vlissengen Road and Duncan Street, Georgetown, they trafficked 10.078 kilograms of cocaine.

Attorney-at- Law Nigel Hughes petitioned for the defendants to be released on reasonable bail.

He pointed out that his clients will adhere to any conditions by the court and will return to court for the trial.

However, Police Prosecutor Gordon Mansfield objected to bail being granted to the defendants citing the prevalence of the offence and the quantum of drugs.

He added that if bail is granted to them they would not return to court for the trial.

The court heard that Denhart then walked over to motor bus PKK 6944 which was driven by Ram, while the teenager and his father, Park were  seated in the bus.

CANU ranks then positioned themselves and approached the vehicles thereafter identifying themselves.

A search was then conducted on both vehicles and in the right side passenger front seat of the bus, a quantity of square brick-like parcels ,suspected to be cocaine, were unearthed.

The ranks then cautioned the defendants and they denied the allegation but they were arrested and taken into custody.

It was said in court that CCTV footage captured the defendants during the commissioning of the crime. And that same footage will be used as evidence in the trial.

The Magistrate, after listening to the Prosecutor told Park, Denhart and Ram that the prosecution has strong evidence against them, hence she remanded them to prison.

Conditions of the bail is that he report every Friday to the officer in charge at the Springlands Police Station until the completion of the trial.

They were instructed to make their next court appearance on August 31, 2018