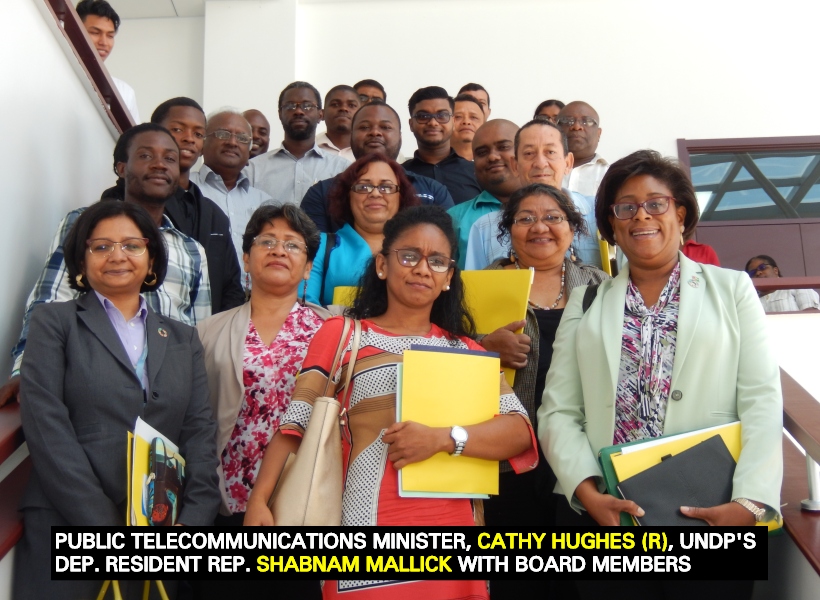 The Project Management Board appointed to overlook the execution of the ICT Access and eServices Connectivity Project for Hinterland, Poor and Remote Communities (HPRC), met for the first time on today at the Arthur Chung Conference Center (ACCC) to become acquainted with each other and with their responsibilities over the five-year life of the project.

This project was conceived in 2016 by the Government of Guyana in concert with the United Nations Development Fund (UNDP).  It is being executed by the National Data Management Authority (NDMA formerly eGovernment Unit) and will be managed by the UNDP and the Project Board.

At the inaugural Board meeting this morning, Public Telecommunications Minister, Cathy Hughes, was pleased that so many arms of Government and organizations in civil society are represented on this major project which is estimated to cost US$17 Million.  These funds originate from the Kingdom of Norway and have been made available by way of the Guyana REDD+ Investment Fund (GRIF).  GRIF is a multi-contributor trust fund to be used for the financing of national developmental activities and mechanisms that balance national sovereignty with investment priorities.

The GRIF was established in October 2010 with the World Bank as Trustee.  After Guyana was branded in Copenhagen as the “Lungs of the World”, Guyana and Norway signed an Agreement in 2009 for Norway to provide Guyana with funds valued up to US$250 million.  The basis for payments was based on avoided deforestation and Green Strategy projects for development.

Minister Hughes told the Project Board that the main objective of this HPRC project is to eliminate the toughest barriers that exist between the Coastland and remote, poor and Hinterland communities.  Apart from the geographical barriers, the people living and working in the identified areas have little to no access to ICT’s – to eLearning, telemedicine, modern security services, and especially to Government services that are now available online.  Even Guyanese living in the diaspora now have access to government’s online services.

Deputy Resident Representative of the UNDP, Shabnam Mallick, stated that this eAccess project will enhance Guyana’s push towards Green Development, marrying ICTs with gender equality and other initiatives while building the capacity of residents to learn and earn.  Over the next five years, the project will serve as a teaching tool, a learning mechanism and a job market for people in the targeted communities.

“Our job is cut out for us,” the UNDP Representative told the Board, since they will be required to make quick decisions in order to move the project along the prescribed timeframe and financial allocations.

Chairman of the NDMA, Floyd Levi, said that the project was designed specifically to take Internet connectivity to: 1) Communities that are vulnerable; 2) Communities that are both geographically remote and costly to access, e.g. Free-and-Easy on the West Bank Demerara; and 3)Communities identified as ‘Poor’, e.g. having little to no access to basic services like electricity and potable water, with education, health and other services unequal to what prevails on the Coastland.  The HPRC will also enable the government to improve its service delivery to the whole of Guyana as promised, and it will enable residents to communicate with their regional administrations and central government in real time.

He said that Wi-fi connections will be installed shortly in the newly re-built Kato Secondary School in Region Eight which is to be re-opened this September.  Kato will then be added to the list of 153 mostly secondary schools throughout Guyana that have been connected to the national networks.  That list includes schools at Paramakatoi, Sand Creek, St. Ignatius in Lethem, Waramadong, Karasabai, and Annai.

He stressed that the Project Board will manage and guide the project throughout its life, ensuring that the quality of materials and delivery meet the best international standards; arbitrating conflict and negotiating solutions if these arise; approve work plans, and ensure that there is fairness and transparency.

The Board’s points of reference are the findings from the Baseline Study and Needs Assessment which was completed and handed over by the German Consultancy firm, Detecon in November 2016; and the comments and recommendations put forward by stakeholders during local consultations.  Those recommendations were enshrined in the Project document that has since been approved by Norway and finally by Guyana’s Ministry of Finance.

Mr. Levi also pointed out the board’s responsibility to ensure that project personnel work closely with Toshaos and indigenous people, taking care to preserve their traditions and cultures; provide technical training and jobs for residents and contractors; and establish ICT hubs in community centers and meeting halls.

Guyana’s Green State Development Strategy Framework Document emphasizes the fostering of sustainable development in the hinterland regions.  One key component towards achieving this goal is the use of Information and Communications Technologies to deliver public services and improve the flow of information to and from citizens.