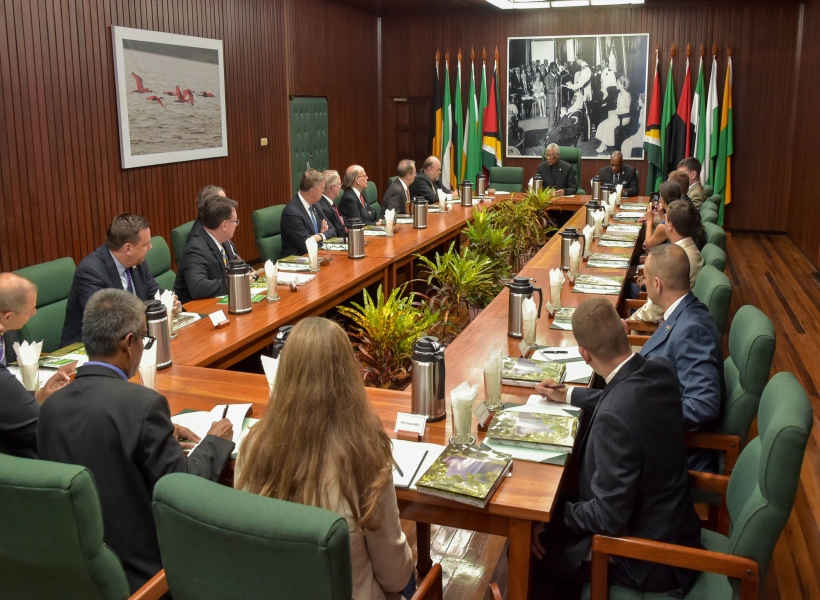 President David Granger, this morning, met with a visiting delegation comprising Congressmen and other officials from the United States of America at the Ministry of the Presidency, where a number of issues were discussed and areas of cooperation were explored.

According to a statement released by the government, the team, which was headed by Republican Bob Goodlatte, included Republicans Steve Cohen, John Rutherford, Scott Peters, Mark Sanford, Richard Hutson and Tod Rokita and other officials.

The Head of State described the meeting as a ‘fact-finding’ mission as he noted that it is an important engagement between the Government of Guyana and the United States Congress.

“We are part of the hemisphere. We have cordial relations with the United States. I see the meeting as largely fact-finding. They want to familiarise themselves with the situation in the hemisphere as a whole and of course, today the focus was on Guyana. So, my brief to them was largely in four areas dealing with points that I think they would have been interested in and I think in that regard it was successful,” the President said.

The four areas, he said, covered a geographic overview of Guyana, its hemispheric affiliations and shared borders; a strategic outline, which outlined the Guyana/ Venezuela Border controversy, territorial controversy with Suriname, Guyana’s international relations and the migration of Venezuelans into Guyana; an economic overview, which dealt with the traditional sectors, the emerging oil and gas sector and Guyana’s pursuit of a ‘green’ agenda and environmental conservation.

“I dealt with the geographic scenario and the fact that Guyana is a continental state. It is a part of the South-American continent but with Caribbean characteristics. It’s the only English-speaking State and as a result of that we have lots of advantages, but at the same time, you know, we are not only perceived as the gateway to South America for the Caribbean but we’re the gateway to the Caribbean for South America. Our geographic situation has, of course, implications for border security because of the territorial claim by the Bolivarian Republic of Venezuela and also claims by Suriname. So, they were interested in that and I gave them the assurance that we are on our way to the peaceful resolution of the territorial controversy with Venezuela,” the Head of State noted.

“The [other] area I dealt with was political. I gave them the assurance, truthfully, that Guyana is a very stable country, law-abiding country, and our National Assembly functions, our judiciary functions independently and also the executive branch. So, those three branches are separate and the executive does not interfere in the judiciary or the autonomous commissions, like the Guyana Elections Commission, the Judicial Service Commission and so on. So, I think from the point of view of governance, we were able to explain that Guyana is a stable, well-governed state,” he said.

The Head of State said that Guyana’s ‘green’ agenda was also discussed and the team was impressed with Guyana’s commitment to protecting the environment.

President Granger noted that the two sides also discussed areas of cooperation, which can be built and enhanced where needed, in areas such as security, energy and disaster response and preparedness.

“The territorial controversy has been our biggest concern but most recently, and because of our long borders we have a 1,300 feet kilometres with Brazil, 800 kilometres nearly with Venezuela and also with Suriname, but we don’t have the assets to protect our borders and there has been some trafficking across the borders; trafficking in guns, trafficking in persons, trafficking in narcotics and trafficking in other contraband goods. These are areas where there could be deeper and more intense corporation between the United States and Guyana. Also, we are aware of the repeated danger of hurricanes and other disasters in the Caribbean and the United States has assisted us, particularly the Civil Defence Commission, in preparing for disasters and management of disasters. Again, this is one area that we want to continue our collaboration with the United States because we don’t have the airlift or the technical capabilities to respond to these disasters,” President Granger said.

He noted too that the Congressmen particularly have expressed interests in the energy sector and the possibility of access to cheap electricity for Guyanese and other stakeholders.