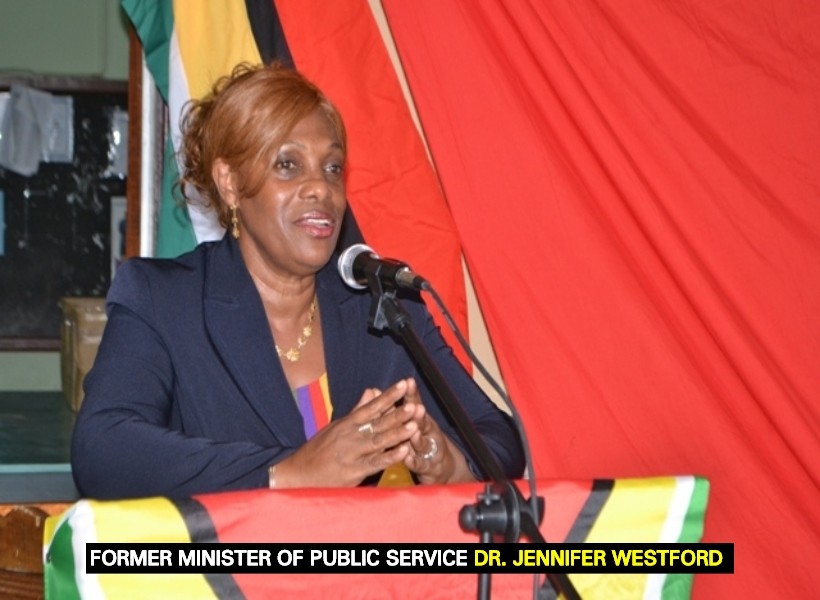 All charges in relation to the theft of $600M against former Minister of Public Service Dr. Jennifer Westford and Margaret Cummings,  were dismissed late this afternoon by Principal Magistrate Judy Latchman.

The Magistrate, after spending an hour going through the evidence of the 48 witnesses called by the Prosecution, told the court that all the charges are bad in law. As such, she ruled that the prosecution failed miserably to make out a case against the women for the theft of over $600M from the State.

Magistrate Latchman then stated that the court will not call on the women to tell their side of the story, since based on the evidence, there is no case against them.

Hence,  she dismissed the matters and told the former minister and Cummings that they were free to go.

Former Minister of Public Service, Dr. Jennifer Westford and her Personnel Officer, Ms. Margaret Cummings had both denied some 24 charges which alleged that between August 2011 and April 2015, while being employed in the Public Service of Guyana, they stole $639,420,000.

Magistrate Latchman, in coming to her ruling, stated, “Westford and Cummings are not Public Officers and all the charges are bad in law.”

Based on the evidence led by the prosecution, at the time charges were laid against Dr. Westford, she had already vacated the post of minister as a result of a change in government.

Based on that, the Magistrate pointed out that under the Constitution of Guyana, Dr. Westford is not a public officer, as was insisted by the prosecution throughout the trial.

Most of the prosecution’s witnesses gave contradicting evidence, said Magistrate Latchman, who surmize the evidence to the court and highlighted major discrepancies and inconsistencies.

In fact, the Magistrate said that many of the witnesses told the court that they cannot recall the activities.

While the Magistrate pointed out that the evidence of the prosecution shows that Dr. Westford signed the memoranda and Cummings collected the cash and returned same to Westford, she noted that Cummings’ signature was not on any documents.

Magistrate Latchman said that there is evidence that Westford requested the funds by way of 24 memoranda between 2011 and 2015 to conduct conferences, training and social activities in the 10 administrative regions.

The lawyers for Dr. Westford and Cummings including Senior Counsel Neil Boston and Dexter Todd had always argued that his clients are not Public Officers and that the charges had no legal basis.

It was discovered that, on numerous occasions, Westford signed memoranda, amounting to $639,420,000, and sent them to the Office of the President for approval.

Approval was granted and cheques were prepared and encashed by Bank of Guyana.

The monies were requested to carry out various activities throughout the 10 administrative regions.

The case was prosecuted by Senior State Counsel Natasha Backer and Teshanna Lake.