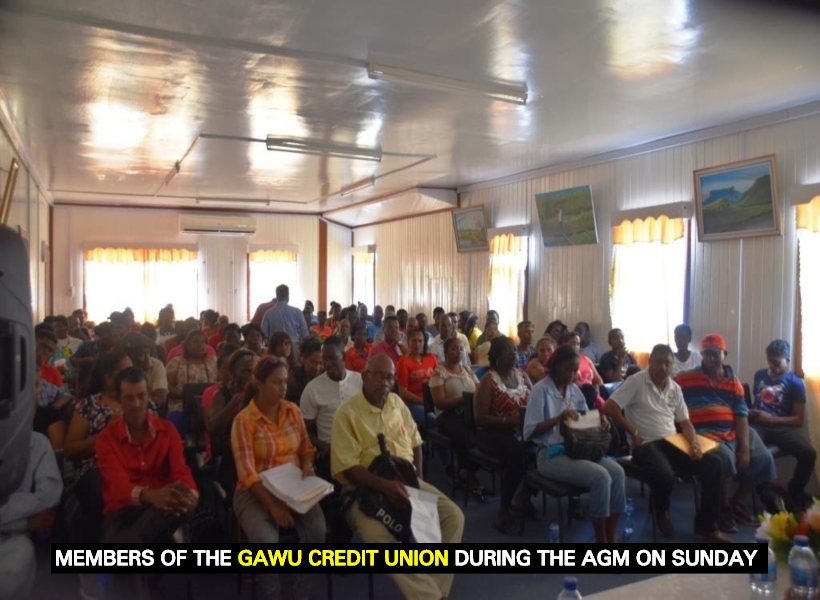 Members of the Agricultural and General Workers Union (GAWU) Credit Union Society Limited were elated to learn that there is a surplus of $4M from which they will all benefit.

This was revealed at the Union’s 23rd Annual General Meeting (AGM) which was held on Sunday last.

The meeting considered, among other things, the Report of the Committee of Management which reviewed the work of the Society since its last AGM in September 2016.

Members were pleased to learn from the Report that the audit of the financial records of the Credit Union for the fiscal years ended 2016 advised of a surplus of $7,619,527. Attendees also heard the Report of the Auditor on the Society’s financial affairs for the year ended 2016 and the report of the Supervisory Committee.

In keeping with the Society’s statutory obligations, $1,523,905 was appropriated to the Statutory Reserve Fund for 2016. The sum of $761,953 was allocated to the Co-operatives Division of the Ministry of Social Protection representing Audit and Supervision fees for 2016.

Further to this, the AGM elected a new Committee of Management to guide the Society’s operations until the 24th AGM. The Committee comprises of Gaietri Baron, Sattie Basdeo, Seepaul Narine, Julius Nurse, Bhikram Singh, Harvey Tambron, and Aslim Singh. At the first meeting of the Management Committee, within the next two weeks, members of the Committee will elect a Chairman, a Secretary, and a Treasurer.

The Supervisory Committee comprises of Kavita Bishun and Hugh Caines.