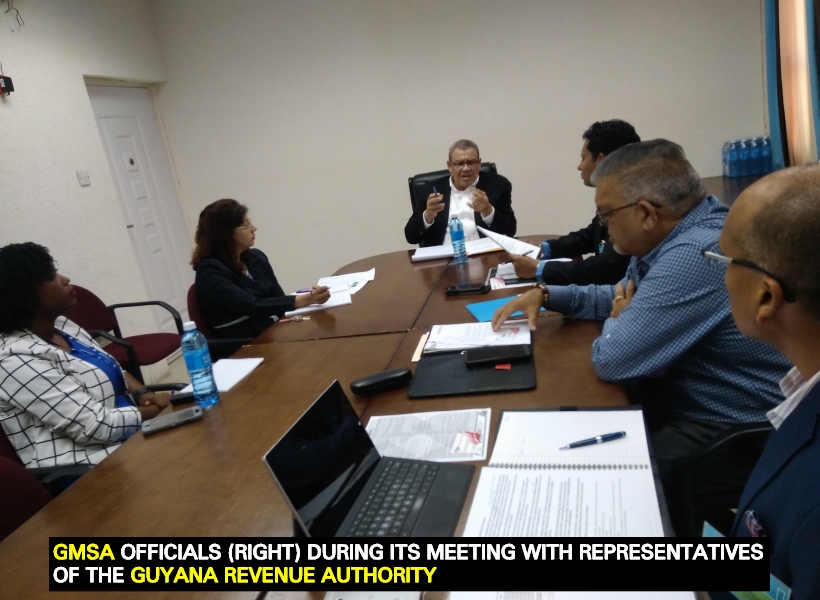 The government’s 2018 amendment to the Value Added Tax (VAT) Act is having crippling effects on manufacturing businesses. In fact, many exporters are unable to reclaim the VAT paid on inputs on goods.

With this in mind, members of the Guyana Manufacturing and Services Association (GMSA) called on the Guyana Revenue Authority (GRA) today to make an urgent intervention. The GMSA team was led by it’s President Shyam Nokta. Also present was Board Member Ramesh Dookhoo and Chair of the Forestry and Wood Processing Sub-Sector Rafeek Khan.

The officials told GRA’s Commissioner General, Godfrey Statia, that major sectors of the economy, foremost being the forestry and wood processing sectors are under undue stress due to the Finance Minister’s amendment to the Act. The GMSA officials further contended that VAT on such inputs serves as a disincentive to producers who primarily manufacture for export and comes at a time when the forestry and wood processing sector is facing several challenges including the deplorable state of interior roads.

The Commissioner General indicated that in keeping with the Minister’s pledge of no new taxes and the fact that the Amendment was intended to improve Administrative efficiency of VAT administration, GRA is exploring ways to address the issue. He also requested that the GMSA explore other avenues and make suggestions with financial analyses rather than making broad statements since the GRA’s analysis, using return submissions, revealed a negligent impact on the industry.Notwithstanding the Commissioner General’s position, the GMSA stood by its position regarding the adverse impact on key economic sectors. GMSA officers also took the opportunity to raise other issues pertaining to tax administration including the implementation of the new scanner system and processing times. They put forward for consideration, a request for incentives for manufacturers in relation to energy and renewable energy technologies. A list of procedural issues relative to facilitating the smooth flow of businesses was also given to the Commissioner for his attention in the near future.Also raised was the issue of addressing Excise Duty on Indigenous Wines in keeping with the Government stated policy of incentivizing local manufacturing. The issue of Excise taxes on Shandy was also discussed whereby the current structure is not in line with other Caribbean territories and has therefore disadvantaged Guyana’s producers.GMSA said it remains encouraged by the Commissioner General’s willingness to have engagements. It was given the assurance that GRA will give active consideration to the issues raised and make recommendations to the Minister of Finance on the way forward.