Home News Business Go-Invest projects over $107.5B in investments for 2018 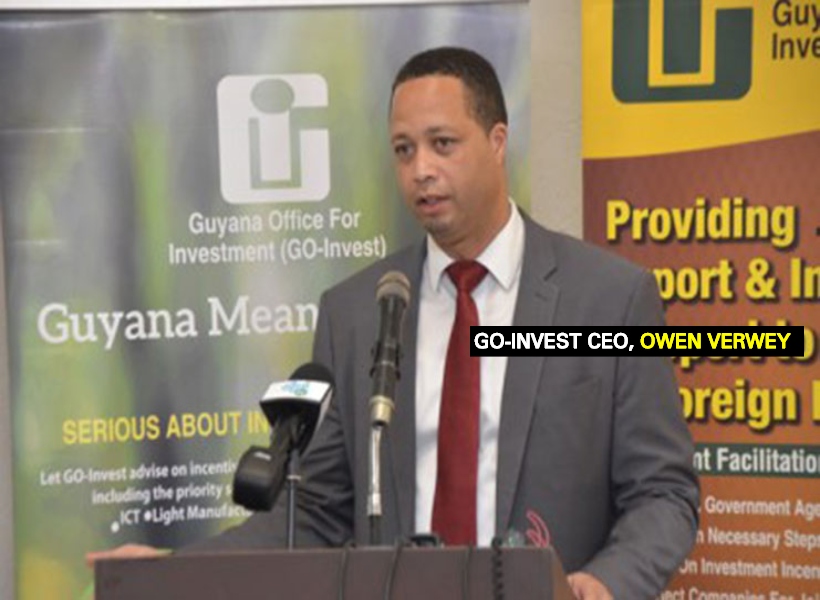 The Guyana Office for Investment (Go-Invest) projects that there will be over $107.5B in investments this year due to Guyana’s buzzing oil and gas sector. This was revealed by the Chief Executive Officer of Go-Invest, Owen Verwey.

At a press conference held at Duke Lodge in Kingstown yesterday, Verwey said that his entity has so far enabled more than $12.5B in executed investments from January 1, 2018, to June 30, 2018, with a projection of over 434 jobs to be created across various sectors, including services, agriculture, and energy.

Verwey said, “We anticipate a substantial increase in executed investment agreements in the second half of 2018, with more than $95 Billion in new projects in the pipeline between January and August 2018. These include projects submitted but are in the due diligence phase either at GO-Invest, the Guyana Revenue Authority, Guyana Lands and Surveys Commission, Central Housing and Planning Authority and Ministry of Business Industrial Division; and others that are still under discussion and review.”

Verwey was also pleased to report that in the first half of 2018, the Agency met with hundreds of local and foreign investors seeking to explore opportunities in Guyana across all sectors.

In this regard, he noted that GO-Invest met with three large-scale investors who have communicated their firm intention to move forward with the investment. Verwey said that one South American company has completed a pilot study on leased lands to grow soya beans (among other crops) and is now seeking lands from the Guyana Lands and Survey Commission for their permanent operations. Verwey shared that the other two investors are Brazilian companies which will start large-scale agricultural investment and the various agencies are still conducting due diligence.

Other applications for industrial and commercial land are going through the various due diligence processes with the relevant agencies.