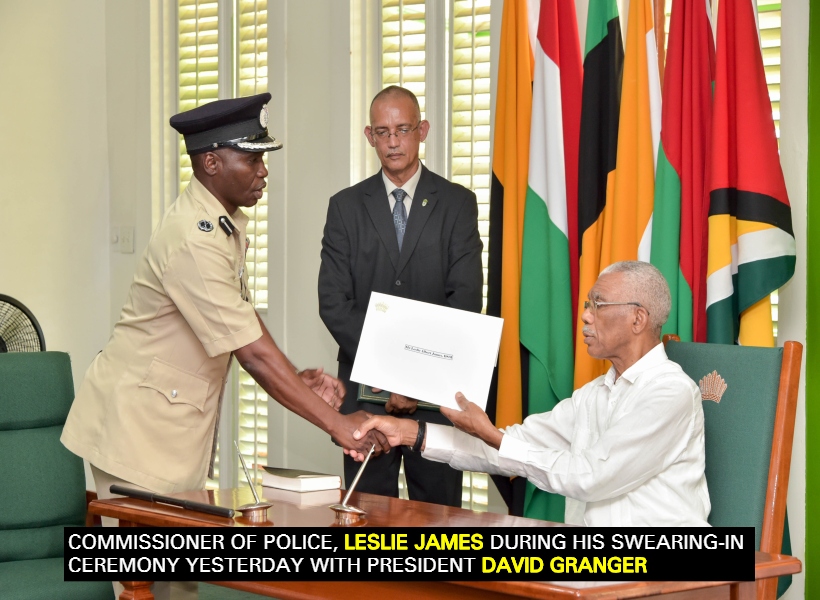 When President David Granger swore in the new Commissioner of Police, Leslie James yesterday, he urged the Top Cop and his deputy Commissioners to ensure that they “work vigorously, not only to fulfill the mandate of the Guyana Police Force but to root out corruption and rebuild and regain public trust.”

Speaking at a simple ceremony held at State House, President Granger said that the Office of Commissioner of Police is not a toy, a trinket or a tool of political favour or patronage. He noted that the security of the State and the safety of the Guyanese people rest on the Police Force and the officers who command it.

Granger said, “This country cannot move forward unless the Guyana Police Force preserves the environment, the peace, and security of the State… In addition to appointing the Commissioner of Police, I have decided that four Deputy Commissioners of Police would also be appointed so that they could assist the Commissioner in the duties he has to bear…”

Further to this, the President noted that the Police Force, for far too long, has gone through a ‘dark’ period. He said that this must be reversed if the safety and security of Guyanese are to be assured.

Granger said, “Countrywide, this country faces challenges. On our western border with Venezuela, we have [migrants] coming in by the day. On the southern border, we still have aircraft landing bringing strange substances. Along our coast, we still have traces of smuggling and piracy, contraband, gun running, narcotics trafficking. Along the coastal areas, women are still being attacked and abused, robberies take place, and unfortunately, too many rogue police officers have been found to be involved in these crimes. We have come through a long dark period in Guyanese history…”

Following the swearing-in ceremony, the President met with the new top brass of the Force to discuss their mandate and other related issues.