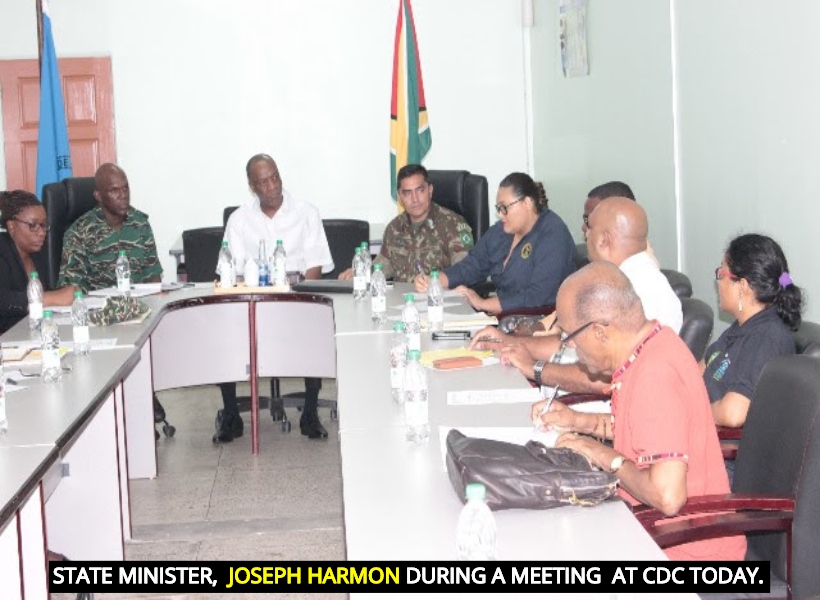 Minister of State, Joseph Harmon met today with the advance team of the Brazilian Army Engineering Battalion and other stakeholders at the Civil Defence Commission (CDC) to ensure the preparation for the drilling exercise in South Rupununi, Region Nine (Upper Takatu/Upper Essequibo).

The team will begin drilling eight artesian wells in eight South Rupununi villages, from October 4. According to Director General (ag) of the Civil Defence Commission (CDC), Lt. Col. Kester Craig, an update was given to Minister Harmon regarding all arrangements in place for the main Brazilian contingent.

“They are making their way to Aishalton to prepare the firm base for the main team which will arrive on Monday.” He said the Minister was primarily concerned about systems are in place for the main team. These include finalizing plans for medical evacuation and waste management and understanding the customs and culture of the communities. The meeting was also to ensure that the road construction is on schedule.

Craig said the Guyana Defence Force (GDF) gave an update on the deployment of their contingent which will be in Aishalton by Sunday. The Minister requested that all head of delegations visit the various communities and reach out to the various village leaders.

Yesterday, Minister Harmon also led a team to the Region Nine community to conduct a reconnaissance of the roads and other facilities.

Minister Harmon said that the visit was necessary as it identified areas in which works would have to be done. The Minister noted that the Agreement for the drilling of the wells was signed at the highest levels with the two Heads of State – President David Granger and Brazil’s President Michel Temer – and therefore, it is incumbent on the government to ensure that all systems are in place and working effectively to ensure a smooth flow of personnel and equipment from Brazil to the identified areas.

“I am here to inspect the works that are being done on the roads in South Rupununi in preparations for a massive well drilling exercise that will take place, utilizing the Brazilian engineers and the Brazilian well drilling teams. I want to ensure that all of the preparations here are in place to receive the teams when they come and to ensure that once they get here, they can commence work without any hindrance,” Minister Harmon stated.

During the drilling phase, there will be technology transfer and capacity building, which will benefit several agencies including the Guyana Defence Force, the Guyana Water Incorporated, the Hydro-met Office and village representatives.

The project follows President David Granger’s State Visit to Brazil in December 2017. A Complementary Agreement on Technical Cooperation between the two governments was inked for the Implementation of the Project Technologies to Reduce the Effects of the Drought in Region Nine.