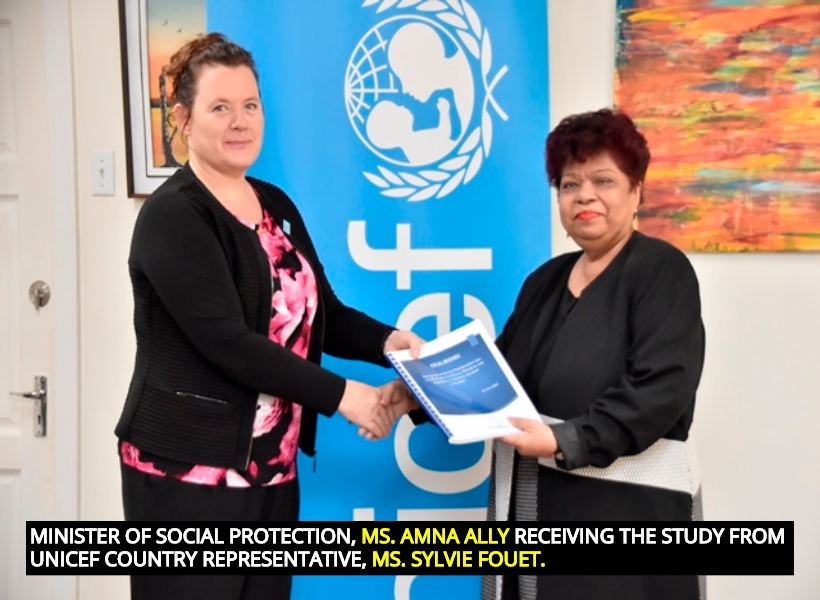 As Guyana observes Child Protection Week, the United Nations Children’s Fund (UNICEF) today, handed over a study on sexual, physical and emotional violence against children to Ministry of Social Protection. The document states that poverty, poor parenting, cultural norms, stress, alcohol, and drug abuse are among the primary contributors to violence against children.

The study has found that female children are more at risk of being victims of child abuse in both urban and rural areas. It also states that there are higher instances of abuse in differently-abled children.

Speaking at the simple handing-over ceremony yesterday at the Ministry of Social Protection, subject Minister Ms. Amna Ally thanked UNICEF for its continued support the Government’s efforts. “We are very happy for the collaboration with UNICEF and we have been able to achieve quite a lot with your input,” she said.

Minister Ally said, too, that Government attaches great value to children and is committed to ensuring they are protected from exploitation. Moreover, the Minister of Social Protection noted that every effort is being made to ensure children are provided with every opportunity to become productive members of society.

“The Child Protection Agency is very active, not only in Child Protection Week but also prior and after. We have developed a very elaborate programme to focus on communities,” the Minister informed.

Meanwhile, UNICEF’s Country Representative, Ms. Sylvie Fouet lauded the collaboration between her organization and the Ministry of Social Protection. She said that the recommendations that emanated out of the study called for an all-inclusive approach, whereby stakeholders from across sectors are involved in the business of child protection. This recommendation speaks to the theme of this year’s Child Protection Week observances- ‘Supporting families to prevent child abuse through education and community development.’

Ms. Fouet disclosed that part of the report focuses on early abuse, which can impact the development of a child’s brain in the long term.

“The report actually fits very well because it’s on social norms and understanding the behaviours and the drivers…It will help to plan a coherent response. The system can do certain things but the community has to come in and that’s where I think the report brings a response from the individual, the collective and the system,” Ms Fouet said.

The Ministry of Social Protection has also undertaken a massive media campaign to tackle child abuse and other social issues which fall under its purview. Advertisements issued through the media campaign have also been translated into the Wapishana and Mucushi languages to cater for hinterland residents.