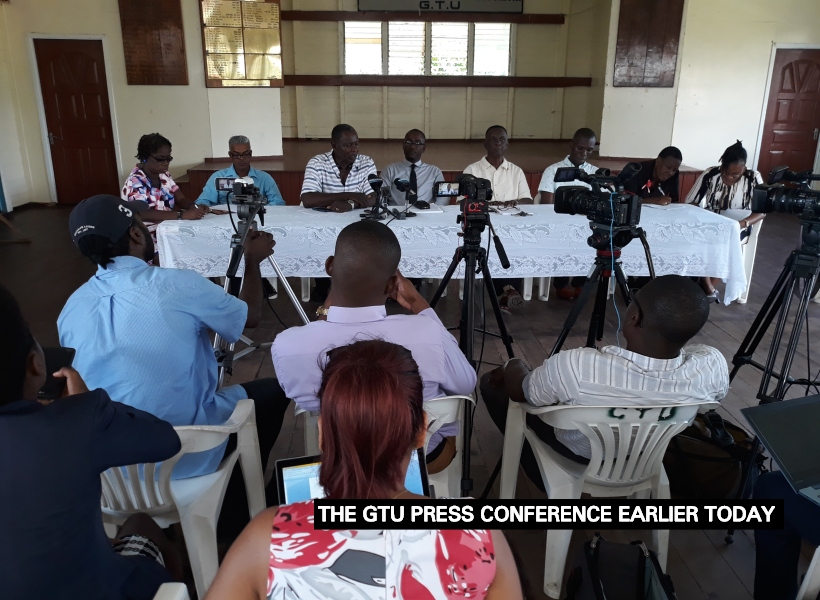 Legal action is not being ruled out by the Guyana Teachers Union [GTU] even as it moves to mobilise its membership to resume strike action. The strike action comes on the heels of government’s failure to accede to the union’s seven days ultimatum to have Minister within the Social Protection Ministry, Keith Scott, rescind his arbitrary appointment of Professor Leyland Lucas to chair an arbitrary panel to negotiate a salary package for teachers.

Despite the assured support of teachers across the regions, Lyte revealed at a press conference today that the union will not be going it alone.

The union has been able to gain the support of trade union umbrella organisations – the Guyana Trade Union Congress [GTUC] and the Federation of Independent Trade Unions of Guyana [FITUG]. Both organisations have pledged unwavering support to the “struggle”.

While Nagasar noted that FITUG had long started to channel its support towards the GTU “and anything that is requested in support of the GTU we will discuss it and move from there,” Lincoln made it pellucid “If we allow governments and employers to continue to breach the Law Laws there will be a time that we will have no say and it is for that reason we will support the GTU.”

Lyte anticipates that the resumption of strike action will be “bigger” than what obtained at the commencement of the new school year last month.

“Just yesterday at a meeting in Region 10 we had overwhelming support coming from our members,” said Lyte. He revealed too that teachers from all other regions across the country have assured their support too.

Even as he lamented over government’s unwillingness to play by the agreed rules, Lyte said that the union is essentially being forced to resume strike action. Although he stopped short of announcing the date for the recommencement of strike action, Lyte expressed optimism that Professor Lucas will see it fit to voluntary recourse himself from his appointment so that the arbitration process can move forward.