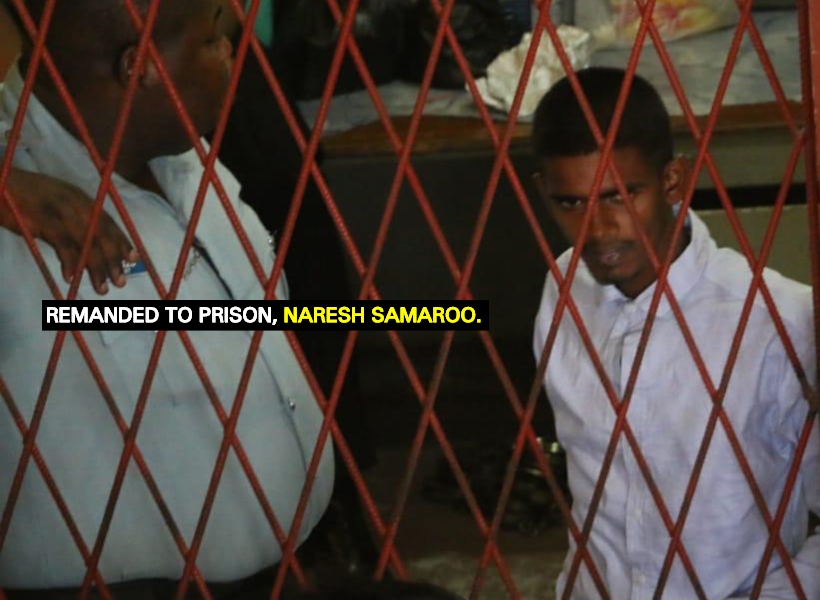 A 20-year-old Albouystown, Georgetown resident, who was positively identified by a dog food vendor as the person who shot him, was this morning arraigned before a City Magistrate.

Naresh Samaroo, a welder, appeared before Principal Magistrate Judy Latchman who read an attempted murder charge to him.

He was not required to plead to the indictable charge which stated that on September 24, 2018, at Stevedore Street, North Ruimveldt, Georgetown, with intent to commit muder, he caused grievous bodily harm to Shane Cooper.

His Lawyer, Latchmie Rahamat in a failed attempt to secure bail, told the court her client, who has an unblemished record, was in custody in excess of 72 hours.

She went on to tell the court that her client was apprehended after police carried out a raid at his home in search of guns and ammunition.

She argued that her client was informed by the police that he was going to be charged with robbery.

Hence,  the lawyer told the court that police failed to read the attempted murder charge to her client while he was in custody.

Facts presented by Police Prosecutor, Shallon Daniels, stated that on September 24, 2018, at around 21:15 hrs, Cooper was at his business place situated at Stevedore Street, when he was approached by three males.

The court heard that the males walked up to the dog food vendor and demanded that he hand over his jewelry.

Cooper, being fearful for his life, tried to escape but was shot in his leg and back.

The injured man was then picked up and rushed to the Georgetown Public Hospital Corporation (GPHC) where he was admitted.

The matter was then reported, an investigation was carried out and Samaroo was arrested.

The court heard an identification parade was then conducted and Samaroo was positively identified by the victim as one of the persons who attacked Cooper.

While the Prosecutor had no objection to bail being granted to the defendant, Principal Magistrate Judy Latchman remanded him to prison until October 17, 2018.

On that date he will appear before Chief Magistrate Ann McLennan for reassignment.