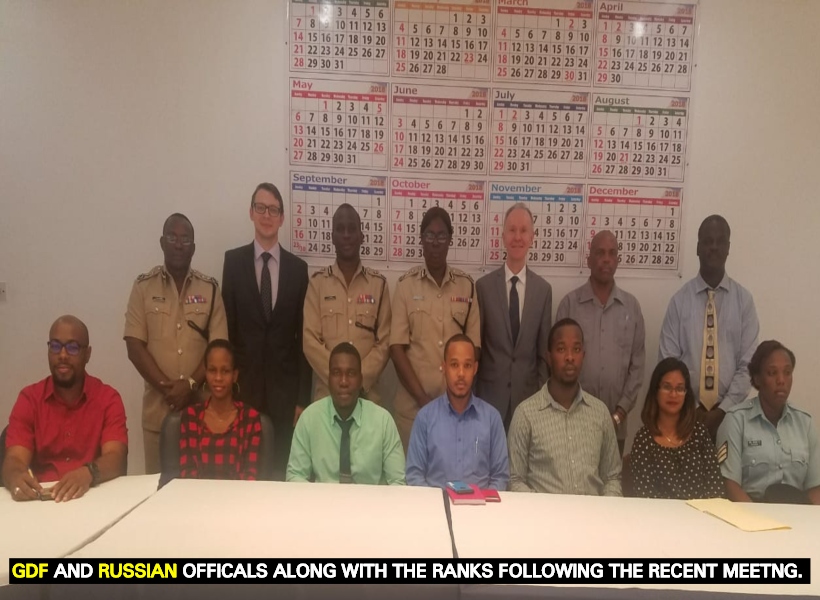 Seven ranks of the Guyana Police Force have been nominated to pursue scholarship programmes in Russia. The ranks ranging from Assistant Superintendent to Corporal will undertake degree programmes that will entail comprehensive law enforcement courses including: Legal Enforcement of National and Border Security, Jurisprudence, Psychology and Criminal Justice System.

The ranks are expected to spend a period of five years in Russia to pursue the programmes. To discuss the wellbeing of the ranks during their stay, the Russian Ambassador, Mr. Alexander Kurmaz, met with Commissioner of Police, Mr. Leslie James, at Police Headquarters Eve Leary. Also present at that meeting was Deputy Commissioner [Administration], Mr. Paul Williams; Deputy Commissioner [Operations] Ms. Maxine Graham; Head Strategic Planning Unit (SPU), Senior Superintendent Royston Andries –Junor, and the seven ranks who have been nominated for the scholarships.

During the engagement to discuss the ranks’ welfare, the logistic and other pertinent matters surrounding the programmes were deliberated on. The ranks were fully involved in the entire engagement and were able to have any concerns addressed. The Guyana Police Force, according to its Public Relations Officer, Jairam Ramlakhan, “is very proud and happy for these initiatives which will contribute to its reform and capacity building.”

Moreover, he said that the Force&#39;s Administration “expresses its gratitude to the Governments of Guyana and Russia for their bilateral relationships which created the opportunity for the Guyana Police Force to benefit.”