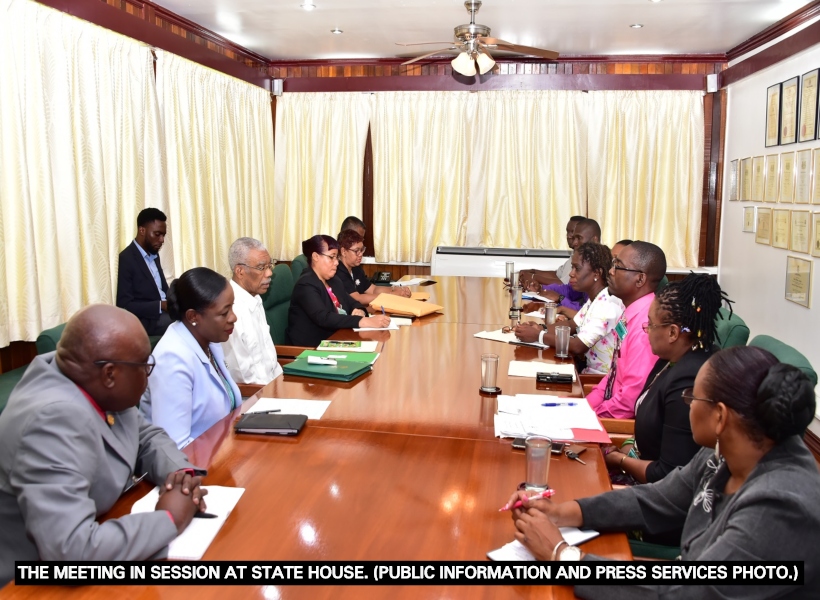 By Friday the deadlock between the Ministry of Education (MOE) and the Guyana Teachers Union (GTU) is likely to end with the union moving to accept a revised salary offer from government.

At least this is according to President David Granger following a meeting between the two sides at State House yesterday.

Government’s revised proposal, which was presented to union executives since Friday, is a 10 percent increase for 2016 and eight percent for 2018. The government is also proposing a $350 million debunching payout to teachers spanning the period 2011 – 2018.

Although the pay hike is fraction of the 40 percent across the board increase the union had proposed, a number of teachers are reportedly willing to accept government’s new offer.

The union, according to information reaching Guyana Standard, is expected to state its position by Wednesday when it is slated to meet with the Ministry of Education again.

Following yesterday’s meeting President David Granger shared his belief that the two sides are now closer than ever to a resolution. He anticipates that an official announcement could be possible by Friday.

“We have had some hiccups but we now seem to be coming to the end of the road. There seems to be wide areas of what I would say common acceptance of what needs to be done. Minister of Education had a long meeting on Friday (October 5) with the Union and… all of the points that were at issue between the two sides were discussed… We have agreed that the two sides would meet again on Wednesday (October 10). The intention is to create a basis for an
agreement between the two sides as early as possible,” he said.

“They are not being ignored or anything. We, of course, expect that the Teachers’ Union consult with its members and the Teachers’ Union expects that we, the Government, consult with the Ministry of Finance. So we have reached a broad area in which, I would say that there is common ground. I don’t want to call it an agreement but we have reached common ground and I think the people of Guyana could look forward to an amicable resolution within days. It is a forward-looking agreement,” the Head of State said.