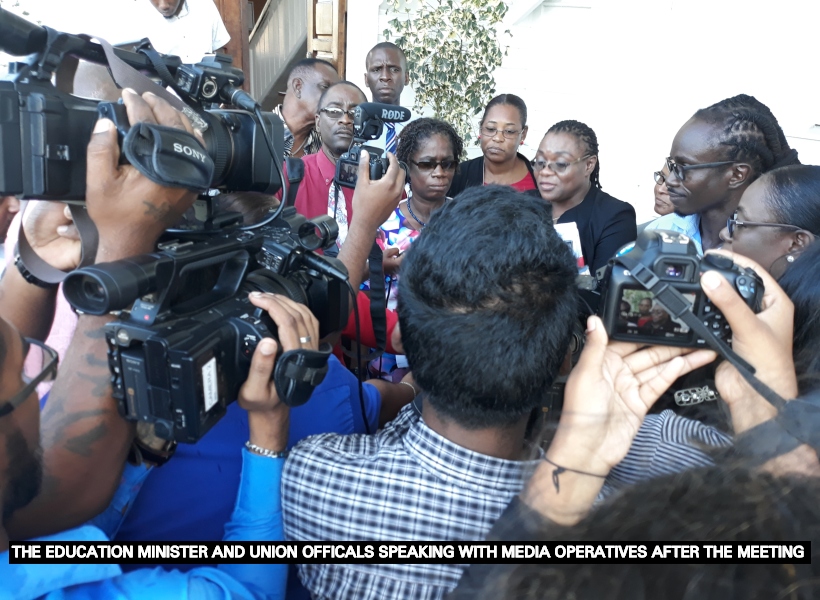 After a near two and a half hours long meeting to discuss a suitable salary hike for public school teachers, the Ministry of Education and the Guyana Teachers Union [GTU] are yet to decide on a suitable package. However, the two sides did emerge in unison.

When posed with questions from the media operatives following the meeting both sides agreed that a joint statement issued by the Ministry expressed their common view.

The statement said that at the meeting the proposals for salaries was discussed and went outline that, “It was a working meeting where new information was provided that were not discussed nor considered prior to the offers made earlier.”

However, neither side seemed willing to share with the media the new information discussed at the meeting. Minister of Education, Nicolette Henry, quipped, “it is a work in progress and so the new information is nothing specific that we would wish to share at this point in time. A lot of what has to be sorted out requires the input of both parties so that we can resolve the issue.”

Reluctantly GTU General Secretary, Coretta McDonald, said, “Like everything else we would have had promotions and with promotions comes new salaries and those are all new information.”

It was outlined that the two parties have committed to review the new information with a view of ensuring that the interest of all teachers will be considered. Moreover, the Ministry said that it has undertaken to provide a matrix of figures which will be presented for discussion at another meeting on Friday [October 12, 2018].

When asked what the union’s position was going into the meeting, McDonald would only say that the union’s membership is convinced that it will make the right decision. “Our teachers are saying they trust our executive members to work in their best interest.”

Speaking directly to the union’s membership, McDonald said, “Just have faith in us, be a little patient because whatever we do, our teachers you are our main concern and you are going to benefit from whatever is the outcome of all of this.”

Government earlier this week revised its offer to teachers proposing a 10 percent increase for 2016 and a further eight percent for this year. Added to this, the government proposed a $350 million debunching payout to teachers for the period 2011- 2018.

The union had however earlier proposed, among other things, a 40 percent across the board increase for teachers in 2016 and an additional five percent for each following year until 2020.