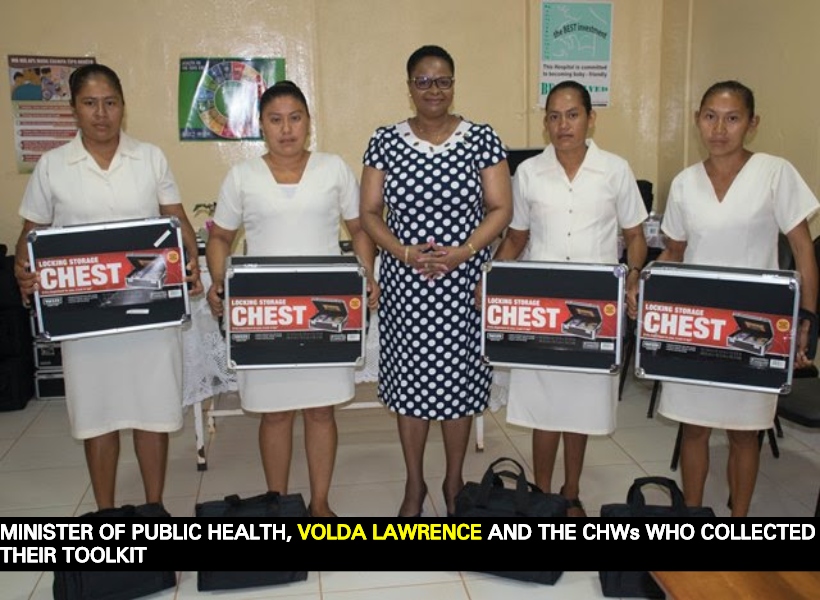 The kits worth more than two million dollars were made possible through an Inter-American Development Bank (IDB) $8M loan to the Government in February 2017. The loan caters for the improvement of the quality of reproductive healthcare delivery in Guyana.

Minister of Public Health, Volda Lawrence said that there has been enough maternal mortality, hence the government is taking the necessary steps to end it.

“A woman dying during childbirth is not good for a community or country at large. We must take this giant step to ensure that our women do not die. We want zero maternal deaths in Region Nine, immediately,” Minister Lawrence said.

Reducing maternal deaths is no easy task and also requires the necessary expertise. Recognizing this, the ministry has already trained several persons from Region Nine to become CHWs and deliver improved maternal and child health services in their region.

The CHWs who have returned to serve their communities and work closely with the midwives, hail from Nappi, Kumu, Annai and Moco Moco villages among others.

This training will bridge the gap between the coastland and hinterland and ensure that all citizens benefit from quality health care, Minister Lawrence said.

She encouraged the CHWs to soar higher and pursue the imminent midwifery training. She also committed to making the necessary resources available.

Regional Executive Officer, Kerwin Ward expressed gratitude to the government for intervening to improve the healthcare situation in Region Nine. He stated that the kits will definitely improve health care in the region and enable the CHWs to properly care for pregnant mothers.

The REO implored the CHWs to put the kits into good use, they work assiduously to eliminate maternal deaths in Region Nine.

On her visit to the region, Minister Lawrence was accompanied by Director of the Maternal and Child Health Programme of MoPH, Dr. Ertenesia Hamilton, Member of Parliament, John Adams and Regional Health Officer (AG), Dr. Alex D’Aguiar along with other officials from the Ministry of Public Health.